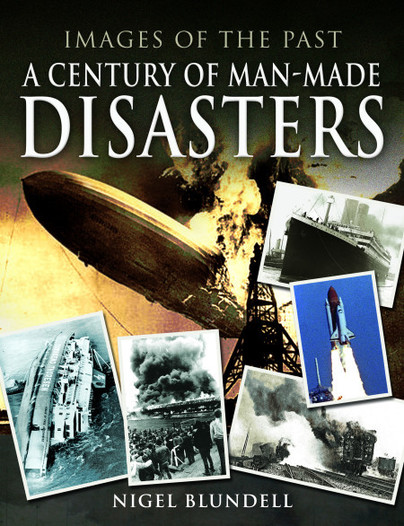 A Century of Man-Made Disasters (Paperback)

Add to Basket
Add to Wishlist
You'll be £8.99 closer to your next £10.00 credit when you purchase A Century of Man-Made Disasters. What's this?
+£4.50 UK Delivery or free UK delivery if order is over £35
(click here for international delivery rates)

This book is a catalogue of disaster – literally. Within its pages are the major man-made calamities that shocked the world throughout the twentieth century.

It was a period during which the power and scale of industrialisation changed the planet, an unforeseen consequence being the creation of more human-created catastrophes than ever before experienced.

The events recorded here include the needless carnage of history’s worst air disaster when two jumbo jets collided on the island of Tenerife. We recall the horrors of Aberfan, the Welsh village in which schoolchildren were buried alive. The story of the explosion aboard the Challenger space shuttle reveals how warnings that were ignored led to the deaths of seven astronauts. And we report on the failings that caused the nuclear nightmare at Chernobyl, a poisonous blot on the face of the globe.

These and the other misadventures in this book were all man-made and, it seems, just waiting to happen. A further link between these horrific events is that they were all caused by either folly or greed – or both.

But despite the tales of monstrous misfortune, many also produced heart-lifting stories of human resilience, selflessness, sacrifice and heroism.


It's a good read. It's also a collection of important lessons shining a bright light on mistakes that cost many people their lives.

The author pairs strong writing with perfectly chosen images to briefly, yet comprehensively tell the stories of 15 different disasters over the 20th century.

This book was right up my street.

Lots of fascinating information about events that I have been interested in before, and some that I knew less about.

A fabulous addition to any social history collection.

Nigel Blundell's selection of man-made disasters doesn't claim to be comprehensive, but for all I know, it may well be. For me, the most vivid and heart-rending disaster has to be the Aberfan coal tip collapse which claimed so many young lives, but there are accounts of other disasters in Nigel's book of which I had no knowledge or that I had forgotten. A fascinating book.

This was such an interesting insight into so many of the disasters of the world that were down to humans. I thought it was so brilliantly written!

The informed and balanced accounts given are very good and informative.

A book that is interesting and informative, a book to buy!

Blundell is never sensational in his text and covers not only how it happened but the repercussions after. There are a lot of photographs to supplement this. In many respects, you do need a reminder of these events to get the full impact (sic) of these events and that we should never forget the lives that were lost. What is still scary is how upper management of these companies still use scapegoats than their own failures in upgrades and cutting costs that might have saved lives had they done something earlier... The cases shown here will make you think.

A Century of Man-Made Disasters is a fascinating and interesting book. I could not put it down. Well written and unique.

It is amazing that our planet is still around with all the disasters that have struck us.
If you are fascinated by plane crashes, there is a vivid description of 2 jumbo jets crashing on the runway killing more than 600 people
Or Chernobyl, whose nuclear disaster could have wiped out millions.
This book describes numerous disaster which are tragic, but fascinating to read about
Mass shootings, boats sinking, earthquakes are described so clearly that you can almost feel the carnage.
However, I really enjoyed this book, feeling that I had a first row seat to all these disasters.

I thought that this book was excellent!

I read the book spread over two evenings and I found it to be quite addictive. I am a massive fan of social history and this book really showed the human element and the disastrous impact these events had on human life as well as also confirming what went wrong to cause the issues in the first place.

The writing style was perfect and I really enjoyed the length of the chapters. They were punchy and full of detail. The images that are added to the book were great and they really brought what happened to life.

I knew about some of the man-made disasters mentioned such as the sinking of the Titanic and the fate of the Challenger space shuttle but an equal amount of them were new to me. These really are tragic and some were very harrowing.

It is 5 stars from me for this book, I have already recommended the book to both my mum and my husband and will be recommending it to others too – very highly recommended!!