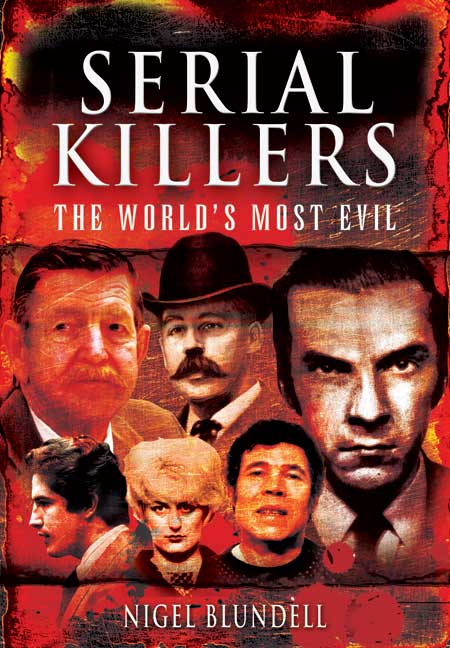 Add to Basket
You'll be £4.99 closer to your next £10.00 credit when you purchase Serial Killers: The World's Most Evil. What's this?
Need a currency converter? Check XE.com for live rates

On an internationally acknowledged ‘Scale of Evil’, these are the world’s worst serial killers. The qualifications for entry to this list of the vilest criminals of all time are a propensity for sadism, torture and murder without a shred of remorse.

Using expert evidence, this book looks behind the shocking headlines and delves into the minds of monsters. What drove them to crime? What turned seemingly ordinary members of society into sick slayers. How did they self-justify their heinous deeds? And, quite simply, how did they get away with murder?

Included in this catalogue of the world’s most evil killers are men who committed crimes so monstrous that they almost defy belief – yet to their neighbours and work colleagues seemed quite normal.

Dennis Rader was a respected pillar of society yet set out on nightly killing sprees. David Parker Ray was just an ‘average working guy’ but had a torture chamber in his backyard. Fred and Rose West raised a large extended family yet violently abused and murdered their own children.

These are examples of the killers who sank to the darkest depths of depravity. Find out what made them such monsters in ‘Serial Killers: The World’s Most Evil’.


For anyone interested in reading a condensed version on serial killers worldwide, i highly recommend adding it to your " to-be-read list"

Fascination with serial killers has grown and grown resulting in films, books and even music being focused upon them. Ultimately what we desire to know is simple. What makes people commit these crimes? How did they end up a murderer? Why are some never caught? The World's Most Evil answers these questions through a step by step analysis of up to twenty seven serial killers including The Doctor of Death Harold Shipman, The Killer Clown John Wayne Gacy and the despicable Fred and Rose West who used their 'House of Horrors' to torture and kill children. Nigel Blundell harnesses his twenty five years spent on Fleet Street to fully capture the minds of these killers detailing their childhood, their methods and ultimately their end. With a foreword by the respected forensic scientist Dr Michael Stone MD, this book will hook and horrify you until the very last page.

Each account in this book seems to be like a well-written thriller novel - but each ordeal was real; chillingly real. The fact that every account in this book is true, makes it all the more shocking. Starting with David Parker Ray, he forcefully sets the tone for the rest of the book. With as many as sixty victims, Ray has been officially dubbed the most evil serial killer in recent history. He drugged, tortured and raped women and kept them chained up in his backyard chamber that he named 'The Toy Box' or 'Satan's Den'. As if Ray's crimes were not sadistic enough, the story takes an even darker turn as his daughter and girlfriend assisted him getting his victims. David Parker Ray's reign of terror was ended when one of his victims escaped: Cynthia Vigil ran through the streets of New Mexico, naked with a metal dog collar around her neck, sobbing. She told of her ordeal and pointed the finger at David Parker Ray, who on arrest, was found to have a torture chamber, containing the most gruesome of sexual weapons. Ray died in 2002 of heart failure, only eight months into his prison sentence, literally getting away with murder. This book not only describes the heinous crimes in the grimmest of detail, it also looks at the minds of the maniacs with an introduction from a forensic psychiatrist, Dr Michael Stone. Only the cruelest and vilest of crimes committed by the wickedest serial killers are included in this book, giving an educated insight into the minds of the worlds worst serial killers.

If there are degrees of evil then the murderers we label Serial Killers are surely high on the the scale of sin.
On an internationally acknowledged "Scale of evil" The characters labeled in this book are the worlds very worst murderers.
This book contains vile criminals that perform acts of murder, torture and sadism without the slightest shred of remorse and goes behind the shocking headlines to discover what drives these seemingly ordinary members of society into twisted killers.
What drives them to kill? How do they self-justify their monsterous crimes? And how do they quite simply get away with murder?, all these questions are answered in great detail by a forensic psychiatrist who delves into the darkest minds of homicidal maniacs and monsters who truly fit the category Serial Killers: The Worlds Most Evil.

This book presents a delving insight into the dark and twisted psyche of those killers who are internationally recognized as the world's vilest criminals on a pre-acknowledged 'Scale of Evil'. These monstrous degenerates are in a class of their own, with a gluttonous propensity for torture, sadism and alike - and all committed without a shred of remorse for their victims. But what is it that drives these killers to carry out such vile acts? How do they justify them? And, in a lot of cases, how do they, bluntly, get away with murder? In an attempt to answer such grim questions, expert evidence is presented throughout the book and world-eminent forensic psychiatrist Dr Michael Stone MD provides an insightful foreword to this sickening, yet gripping publication.

Evil is a word to sum up the content of this book, as Blundell gives an account of the horrific nature of some of the worlds most horrendous killers. Each person featured within this book is as evil as the next, however this isn't just a catalog of hideous people, it delves deeper into their state of mind and tries to shed some light into why these people committed such brutal crimes. Blundell encapsulates details in which make it hard to turn away from, as a person you know that you shouldn't read such horror stories but at the same time the content is strangely compelling, it is as thought these people are monsters and yet, you want to know why these people did such devastating things. When reading you have to abandon all thought that these people are actually human, because the acts that they take part in are inhumane, it also carries with it the terrifying realisation that some of these killers behaved like everyday citizens, which then in turn makes you feel a little sceptical and wary of people. That being said it is a gripping read and gives the chance to explore the most evil people in the world at a safe distance.

The World's Most Evil is possibly a departure from other publications on the subject of murder or other heinous crimes. Nigel Blundell goes 'behind the headlines' and takes a more psychological approach as he attempts to explore the minds of some of the world's most infamous serial killers. A foreword by renowned forensic psychiatrist Dr Michael Stone rather sets the tone for what is to follow, and that tone is an uncomfortable one. This seems to be almost a celebration of some of the twisted minds covered, a certain level of notoriety and 'pure evil' has to be achieved to be worthy of inclusion! Indeed, one has to be gloomier of mind to find a dark fascination with the subject at hand although such as it is to arouse some level of curiosity in all of us. Blundell's work itself is a generous selection of some of the world's most evil killers, including the most well known UK cases such as Myra Hindley, Fred and Rose West, and Harold Shipman. There are also some less well-known examples that are considered interesting nonetheless because of the perceived oddity of the crimes (see the 'Killer Clown'). Each individual piece is succinct but covers neatly all aspects of the story concerned, with particular focus given to examining the psyche of the monsters usually in the form of a brief closing analysis by Dr Stone himself. What grates a little is the constant referral to Stone's own so-called 'Scale of Evil' where delight seems to be taken in the ranking and comparing of different levels of evil based on the acts committed. This seems a little insensitive considering the subject at hand, and claims that the book may aid us in being warier against such 'fiends', and spotting danger signs in time, are perhaps hollow. Nevertheless, what cannot be denied is a darkly intriguing topic bound to tempt the darker side in us all.

I am a huge fan of true crime short stories and Nigel Blundells don't disappoint. Even with some of the cases (i.e, Ted Bundy) on which I have done extensive reading, Blundell Still brought an interesting tidbit or two to the story.

For anyone interested in reading a condensed version on serial killers world wide, I highly recommend adding this book to your to-be-read list.