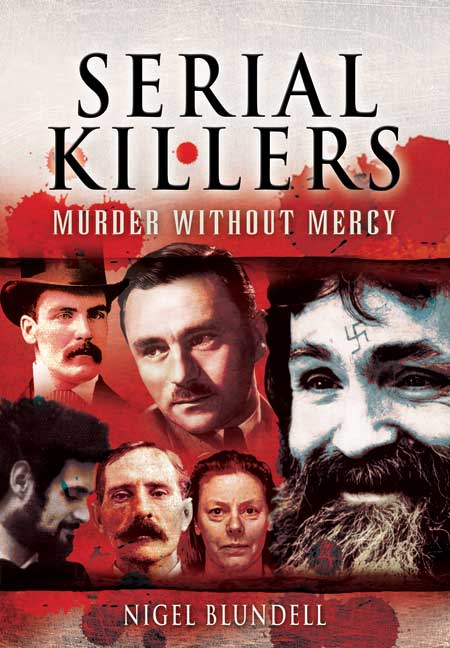 Add to Basket
Add to Wishlist
You'll be £16.99 closer to your next £10.00 credit when you purchase Serial Killers: Murder without Mercy. What's this?
+£4.50 UK Delivery or free UK delivery if order is over £35
(click here for international delivery rates)

They are the criminals who horrify us most… murderers without mercy. They may be driven by greed, hatred, sadistic urges or simply bloodlust. But there is one added ingredient that makes their crimes utterly reprehensible in the eyes of a civilised society – and that is a total lack of remorse for their vile deeds.

This book is about the most perverse perpetrators of those crimes: the murderers who show no compassion, who kill without a hint of regret, without penitence, without shame. And their lack of conscience is clear because they do so not once but over and over again.

A companion volume to Serial Killer’s: World’s Most Evil and Serial Killers: Butchers and Cannibals, this book catalogues a disparate array of notorious criminals from Victorian poisoners to present-day shootists. But all have a common flaw in their characters that leaves them, for all the wrong reasons, guilt free. And it is that genetic glitch that makes them so eerily fascinating.

I am becoming a bit of a fan of Nigel Blundell.

This is the second book in his series, Serial Killers. I have to say its every bit as creepy as the last one. This one covers another bunch of killers who seem to be psychopaths.

Not to be missed

Nigel Blundel, has written two other books featuring Serial Killers; both of which I enjoyed immensely. But this third book, is, in my opinion the best of the three.

It provides a perfect blend of historical and contemporary true crime stories from around the world.