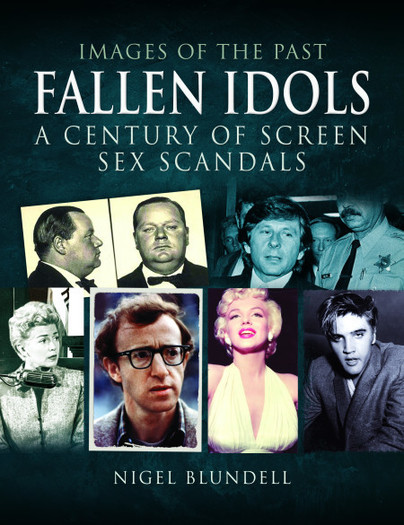 Images of the Past: Fallen Idols (Paperback)

A Century of Screen Sex Scandals

Add to Basket
Add to Wishlist
You'll be £8.00 closer to your next £10.00 credit when you purchase Images of the Past: Fallen Idols. What's this?
+£4.50 UK Delivery or free UK delivery if order is over £35
(click here for international delivery rates)

Within these covers are startling stories of scandals during a century when screen idols seemed to vie with each other in outraging public decency. It was an age when fan fever was at its height and an endless supply of shocking revelations emerged to fuel the frenzy.

Because of the perpetrators’ superstar status, the shame of exposure was often heightened, not only wrecking reputations but often harming careers and, at least, ensuring very public humiliation.

The lessons learned from these cases of celebrity scandal (though often, it seems, not by the celebrities themselves) is that the bigger the star, the harder the fall … and that deceit and intrigue so often turn hard-won fame into instant infamy.

I love the scandal, gossip and intrigue from the times gone by regarding some of the most famous and popular people of their eras. Some of the actions not only being scandalous at that time, they would still be right up there with some of the most awful acts of the 21st Century too.

I knew a fair bit about the celebrities features but there were a few entries that were eye openers and it really is remarkable how a lot of them did manage to get away with their scandals without much damage to their careers – not sure the same would happen today especially with the #MeToo movement!

It is 5 stars from me for this one, I find books like this really addictive and I read this one in pretty much one sitting – it was a great book to read and I loved being able to read more about the different scandals these Hollywood greats were involved in – very highly recommended!

They also experience some sort of scandal, off-set dalliances, too-high expectations from their families, marriages at a young age, and addiction. Each is supplied with a loose biography with direct focus on a famous person’s dark side, court cases & allegations after their death, tell-all books, and, sometimes, photographs that I’ve never seen before.

Years ago, I spent a lot of time reading biographies about movie stars from the Golden Age of Hollywood. It seemed like such a glamorous time, and I was completely enchanted by the idea of it, so I read about as many of the old movie stars as I could. As a result, I was already familiar with many of the stories told in this book. It was interesting to read about them again, particularly when I’d forgotten certain details or didn’t know how that person’s story ended.

I particularly enjoyed the photographs. I had never seen most of them before, so I spent a lot of time examining them.

This book describes the rise and spectacular fall of some of the rich and famous names of actors, actresses, and Hollywood Moguls.

Sex, alcohol and drugs fuelled their lives and produced some truly outrageous behaviour from several that you know well and quite a few that managed to keep their antics private; until now!

This book manages to be both informative and an extremely good read.

Like a compendium of celebrity magazine articles, Nigel’s fascinating book takes an in-depth look at some of the most notorious and iconic screen sex scandals of the twentieth century, some of whom are sill alive. Some unseen photos (for me) make this a must read.

If you ignore the abuse and murders, this book is a bit of fun and gossip about the film industry, full of useless trivia that film buffs and celebrity followers will enjoy. The true crime enthusiasts will enjoy the murders and other crimes. It’s illustration heavy too,

This is a fun book for people who love anecdotes and to peep into the lives of the Hollywood famous, especially those from the era of the Hollywood big studios. If you want a brazen and amusing book, with its dark moments and plenty of pictures to get the conversation going, or are looking for a present for somebody who loves movie memorabilia, I recommend it.