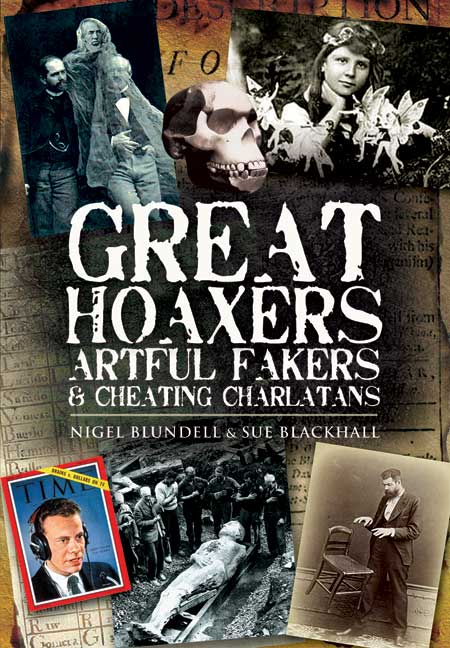 As seen in the Sunday Mirror, January 2018

You'll be £19.99 closer to your next £10.00 credit when you purchase Great Hoaxers, Artful Fakers and Cheating Charlatans. What's this?
+£4.50 UK Delivery or free UK delivery if order is over £35
(click here for international delivery rates)

The slogan of the successful huckster is: 'There's a sucker born every minute'. No catchphrase better describes the art of the hoaxer, faker, cheat and charlatan ­ a fascinatingly fraudulent assembly of whom are gathered in this book. Some are suave and charming; others have far less appealing characteristics. But every one of them displays a single-minded determination to get one over on the unwary and the unsuspecting. Among the phonies and philanderers who had a field day at the expense of others were: the fake pilot who conned his way into airline cockpits (and into the beds of countless ladies along the way); the author who fooled publishers with the 'biography' of a man he¹d never met; the fake royal who falsely assumed an illustrious lineage, and the phantom pianist whose
magical music was entirely the work of others.

There were also art forgers who delighted in conning the cognoscenti. And there were those with more mundane ambitions ­ to be loved, to be rich or simply to be respected. Together they make up an astonishingly varied
gallery of fakers, forgers, charlatans and cheats, with a few hoaxers and pranksters practising their tricks along the way.

Various motives link the disparate bunch of characters assembled in this book but they have one thing in commons the astonishingly brazen way in which they have pulled off their fantastic fakery while pulling the wool over the eyes of the rest of us!