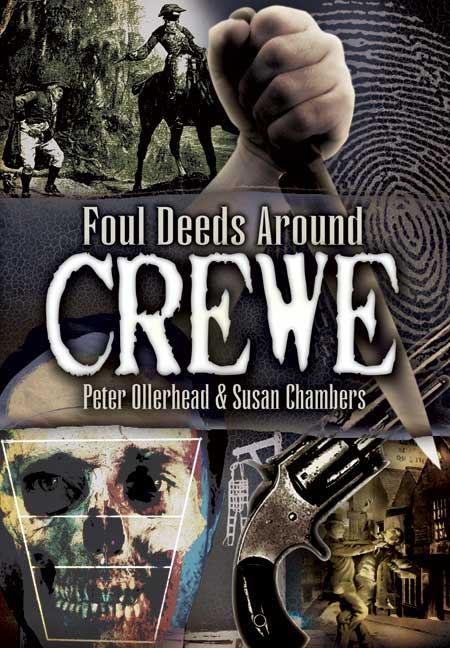 Click here for help on how to download our eBooks
Add to Basket
Add to Wishlist
You'll be £4.99 closer to your next £10.00 credit when you purchase Foul Deeds around Crewe. What's this?
Need a currency converter? Check XE.com for live rates

Foul Deeds Around Crewe takes the reader on a fascinating journey through centuries of local crime and conspiracy, meeting villains of all sorts along the way - casual killers and robbers, murderous husbands and lovers, prostitutes and poisoners. This revealing book recalls many grisly events and sad or unsavoury individuals whose conduct throws a harsh light on the history of Crewe and the surrounding countryside.

Among the many acts of wickedness the authors recall are shocking crimes from the recent past – the daughter who poisoned her father, a murder in a stately home, two brothers who conspired to kill their father, a mysterious ritual drowning and the killing of a policeman. But they also cover in vivid detail the early criminal history of the area - the theft of sheep, cattle and horses, crop-wrecking, rural assaults, land-disputes, poaching and highway robbery. The ruthless punishments meted out to convicted criminals – public humiliation, imprisonment, the death penalty – are an essential part of the story.

This chronicle of Crewe’s hidden history - the history the town would prefer to forget - will be compelling reading for anyone who is interested in the dark side of human nature.

Peter Ollerhead started working at Rolls-Royce, then became a teacher and a second-hand bookseller. He broadcasts regularly on Premier Christian Radio, is secretary of the Crewe Historical Society and chair of the district’s Historical Association. He has lived in Crewe for most of his life and has researched deeply into the town’s origins and development. In addition to writing many articles for journals, he has published Making Cars at Crewe, a social history of Rolls-Royce in Crewe, and Crewe: A History and Guide.

Susan Chambers is a keen student of the history of Cheshire and the Crewe area in particular, and she is the author of Crewe: A History.


Written by local author Susan Chambers and Peter Ollerhead the secretary of the Crewe Historical Society, the book delvels into sinister tales of murder, robbery, jealousy and betrayal. Foul Deeds around Crewe takes readers on a journey through centuries of local crimes and conspiracy. Covering felonies that have never been published before such as a daughter who poisoned her father and a murder in a stately home, it brings to light the darker side of human nature in 17 notorious chapters.

Susan Chambers currently lives in Chester, and spends much of her time in Cheshire Record Office, doing local history research and also working as a volunteer. She has written and contributed to several books and articles on the history of Crewe and Neston. Susan is a member of the committee of Cheshire Local History Association, and is currently editing a major work on the early history of the parish of Neston.