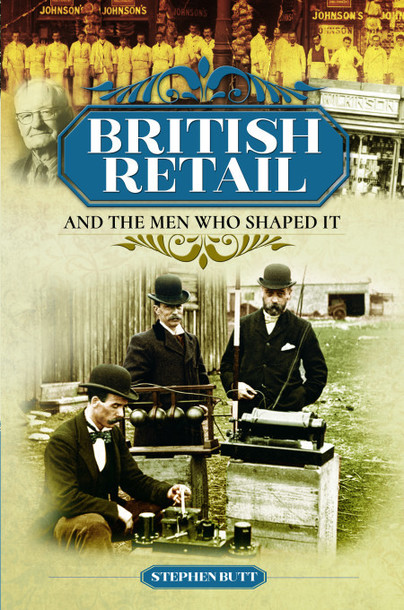 British Retail and the Men Who Shaped It (Hardback)

Add to Basket
Add to Wishlist
You'll be £11.99 closer to your next £10.00 credit when you purchase British Retail and the Men Who Shaped It. What's this?
+£4.50 UK Delivery or free UK delivery if order is over £35
(click here for international delivery rates)

Many of the high street names that meet our twenty-first century needs began with men and women who had ideas, imagination and sheer determination in a different age. Whether you are nine or ninety, shopping is a universal part of modern-day life, and in British Retail and the Men Who Shaped It we look at the people behind the corporations that built the modern-day high street and changed the way we shopped.

Meet Henry Curry, who began making bicycles to earn an income to support his family and went on to found Curry's PC World. James Wilkinson sold household goods in a quiet neighbourhood street in Leicester, and always offered a fair deal. He founded the Wilko's chain of retail stores. Thomas Cook was a Baptist preacher strongly opposed to alcohol. He organised the first-ever rail excursion to take workers away to an alcohol-free event in Loughborough, from which the worldwide Thomas Cook travel empire developed. George Davies was a buyer of stockings and tights for Littlewoods Stores who launched Next before creating his own company, George, currently retailing through ASDA.

This book is a celebration of the people who, through self-belief and determination created the multi-million-pound retail businesses we use every day.

How a Melbourne Man Shaped the High Street

A fascinating insight into the life of Melbourne-born Thomas Cook and his part in shaping the Great British High Street is there to be discovered in a new book uncovering the history of British retail.

This entertaining book, packed full of anecdotal detail, tells the story of how Thomas Cook and other entrepreneurs saw a gap in the market and went onto found the best known names on the British High Street, such as Wilko, Thorntons and Currys.

One of the many interesting nuggets to be gleaned from Stephen Butt's delve into the history of retail, is that it was on the exact same road that William Wheeler Kendall walked from Market Harborough to Leicester in 1870, intent on making his fortune there.

Very good from start to finish!

Stephen Butt joined the BBC as a Studio Manager, with degrees in Psychology and English Regional History. He became a Senior Broadcast Journalist and joined the management team at BBC Radio Leicester. He worked on Michael Wood's 'Story of England' and 'Great British Story' on BBC2 in 2011 and 2012. He now enjoys writing and historical research, with over twenty social history books in print.