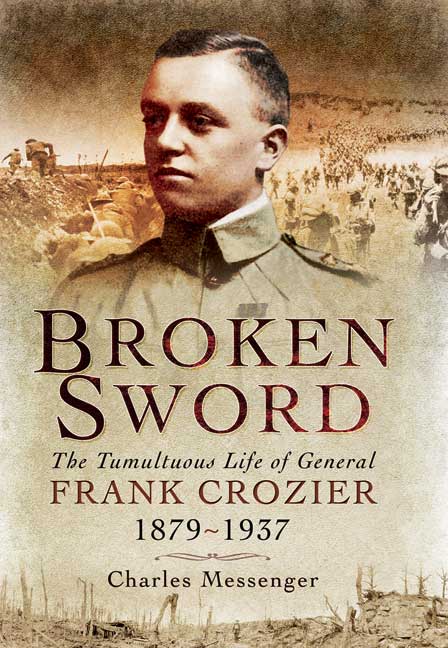 Add to Basket
Add to Wishlist
You'll be £25.00 closer to your next £10.00 credit when you purchase Broken Sword. What's this?
+£4.50 UK Delivery or free UK delivery if order is over £35
(click here for international delivery rates)

Brigadier General Frank Crozier (1879- 1937) was a highly controversial figure in his day. As a young soldier he saw active service in the Boer War and West Africa before being forced to leave the British army because of financial irresponsibility. He tried to start a new life in Canada and then, on his return to Britain, joined the Ulster Volunteer Force.

On the outbreak of the First World War he was appointed second-in-command of a battalion in 36th Ulster Division, becoming its commanding officer in autumn 1915 and leading it in action on 1 July 1916. He commanded a brigade with much success for the rest of the war.

Forbidden to stay on in the British army after the war, he became inspector-general of the Lithuanian army in 1919, but resigned after six months. Made commandant of the Auxiliary Division of the Royal Irish Constabulary at the height of the Troubles, he resigned in highly controversial circumstances.

After being declared bankrupt for a second time, he was involved in the League of Nations Union and then turned to
pacifism, becoming a founder member of the Peace Pledge Union. By now he had, through his best-selling writings, become a thorn in the side of the establishment. Charles Messenger's meticulously researched and highly readable biography of this maverick soldier is the first full account of his life and times.

This well researched, objective, and not unsympathetic account of a complex individual who was by turns courageous, kind, brutal and repellent, sheds light on both Irish and Great War history. It deserves a wide readership.

Charles Messenger, with his trademark diligence in seeking and marshalling sources, has produced a rounded account of this most controversial figure. It is unlikely to be surpassed as the baseline source on the subject.

Charles Messenger has crafted a genuinely interesting and invigorating examination of a man whose military service spanned colonial actions in Africa, the Western Front and the Troubles in Ireland. Messenger's research is, as always, meticulous and impressive in its range and depth.
It succeeds on multiple levels; it provides a thorough examination of Crozier's verifiable past and the military context in which he existed, whilst also showing that historical research is rarely as easy as it appears. Crozier's unreliability is a major part of his character. Messenger never hides from this and allows the verifiable facts to allow Crozier's protean nature to shine through.

US Journal of Military History

An interesting and easily accessible biography that utilises an impressive array of archival documents.

Forget the warts, Broken Sword a fascinating boils and all biography of a unique Divisional Commander of a strange driven character. Frank Croziers career, in all but his genuine moral and physical bravery, was both Flashmanesque and fascinating.

In this excellent book, Charles Messenger summarises the often controversial Crozier as a mixture of good and bad, a plausible rogue "admired by some, with a scant regard for the truth". Read about his command with 119 Brigade and judge for yourself.

The author has done a fine job rescuing this interesting and controversial, flawed figure, Crozier - considered a fine 'front line commander' of the Great War - from relative obscurity. The reader of this volume will gain a greater appreciation of the human element of leadership in combat, and will enjoy reading this absorbing account as much as the author seemingly enjoyed writing it.

Author Charles Messenger is both an ex soldier and well established military writer. His skills as a writer and researcher into the obscure depths of a highly complicated career - and the duplicitous and complexity post war politics in which Crozier became involved - is fascinating. He seeks to sort fact from fiction about the mans career.