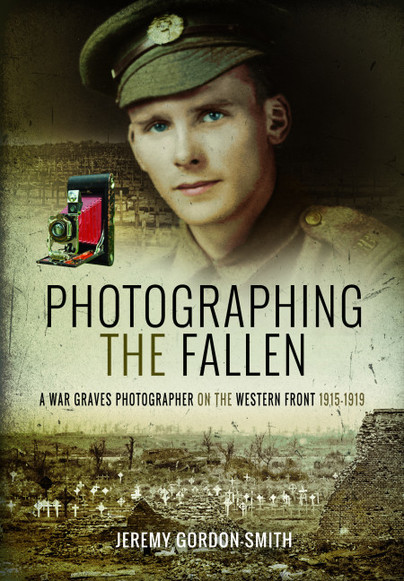 You'll be £4.99 closer to your next £10.00 credit when you purchase Photographing the Fallen. What's this?
Need a currency converter? Check XE.com for live rates

Ivan Bawtree has left behind a vast array of archives that tell the story of his work as a photographer with the Graves Registration Units on the Western Front from 1915 to 1919. He travelled to numerous parts of Northern France and Flanders, most notably the Ypres Salient, to photograph and record graves of fallen soldiers on behalf of grieving relatives. He was one of only three professional photographers assigned to this task, hired by the newly formed Graves Registration Commission in 1915.

Through his pencil and lens we gain detailed insight not just into the work he did and the men he worked with, but also aspects of the military zones, the perils of proximity to the Front Line, the devastation of war, and the birth and early work of the Imperial War Graves Commission.

Today, the war cemeteries that Ivan saw spring up across battle-scarred landscapes and provide the most widespread and enduring reminder of the scale of loss and sacrifice of the Great War.

An interesting book about a little known aspect of the Western Front and about the people who recorded it.

The ‘Bawtree collection’ is available to view online via the Imperial War Museum’s website and is well worth taking a look at; Photographing the Fallen provides an excellent context to these pictures and provides a valuable insight into the little-explored work of the Graves Registration Units.

This has to be one of the more profusely illustrated of Pen & Sword's books, published to the usual high standards and including useful notes, a bibliography and index. Better still it is well-written and a fitting tribute to the man behind the lens.

...And then there is Ivan, a man I would like to have known. That he was a good man shines through the pages of this lovely book. It is fitting to know that he rests in peace.

An excellent book and I think it's worth saying thank you to the author for sharing his family history with the rest of us.

★★★★★ This is a lavishly illustrated book with at least one image on the majority of the pages.

This book provides a poignant, and special visual snapshot of the War Graves, photographed at a unique time.

Jeremy Gordon-Smith has edited photographs taken by his Great-Uncle, Ivan Bawtree, who worked for the Kodak Company and who became an official photographer of war graves on the Western Front during the First World War. Ivan worked for a special Graves Registration Unit set up during WW1 when “it was decided that each soldier, regardless of rank, should be given an individual burial with a wooden cross, later to be replaced with a headstone” (pp.13-14). The Unit worked continuously, dangerously close to the Front Line, and in all sorts of conditions, taking photographs of the graves and cemeteries. The photographs were developed onto glass plate negatives – fortunately Ivan made two copies – one of which he kept. Jeremy’s father rescued the plates after Ivan’s death. The result is an amazing book which, to my mind, is required reading for anyone visiting the cemeteries of the Western Front or anyone who had a relative killed during WW1.

Jeremy takes us on a journey of discovery from the early days of the setting up of the Imperial War Graves Commission (now known as the Commonwealth War Graves Commission) to the end of the Commission’s work on WW1 graves and cemeteries on the Western Front, which was, ironically, completed in 1938. Also included are extracts from Ivan’s diaries and an account of the personal story of Ivan’s life up to his death in 1979 and, at one stage, he worked as an Orderly at the Field Hospital next to Lijssenthoek Military Cemetery.

Ivan’s work with the Graves Registration Unit was vital for morale, as it gave those people who were unable to visit the graves of relatives who had been killed or died. “His job facilitated a way for families to mourn their loves ones who had lost their lives in the line of duty. His work provided relatives with something tangible of what remained of their loved one; a window they could not otherwise have had… (p. 117). Many of the photographs in the book remind us of those who came from far away to help the Allied cause – Australians, Canadians and the grave of Li Hung Ching, a Chinese Labour Corps worker who died on 21st January 1918 (p.218)

I particularly liked the way Jeremy has blended some of Ivan’s WW1 sepia photographs – which are amazingly clear - with recent photographs he took while re-visiting Ivan’s old haunts on the Western Front. One photograph, taken on Whit Monday at Ypres during a sports day, shows an orchestra that “consisted of a party of German prisoners and escort. The prisoners performed with violins made by themselves out of cigar boxes, etc. They did very well.” (p.254).

I found this book extremely moving and it is surely a wonderful memorial to the work of Ivan and his fellow members of the Registration Unit but also to all those who were killed or died on the Western Front during WW1.

Have viewed the 'BAWTREE IVAN L COLLECTION - Imperial War Museum' online, the content and choice of examples in the book have been sensitively presented. This book is must for anyone visiting CWGC Cemeteries in France and Belgium and enables us to learn about the work of the Graves Registration Unit.

'After the war the war the cemetery was transformed into a secluded oasis of tranquility and beauty, a striking contrast to the desolation shown in Ivan's photographs.' page 100 Photographing the Fallen

Here is an opportunity to pause for reflection, whilst acknowledging the horror and destruction - the photographs capture moments reflecting the strength, resilience and determination to remember and rebuild that makes the book unique.

Jeremy Gordon-Smith is a family historian and photographer with a keen interest in the world wars. He has a particular fascination with the Western Front and learning about the experiences of those who endured it. He works as a counsellor in private practice, enabling people to explore their own stories and overcome issues including grief, loss and trauma.