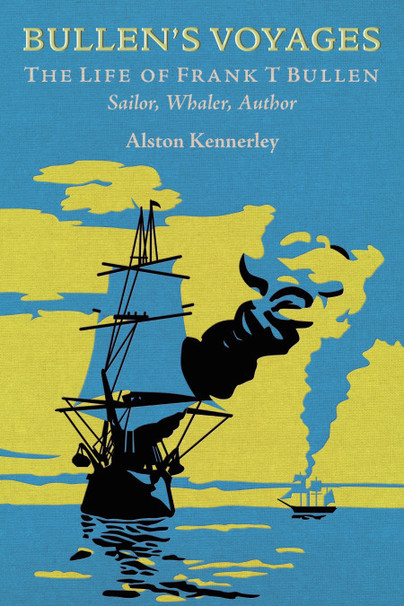 Add to Basket
Add to Wishlist
You'll be £20.00 closer to your next £10.00 credit when you purchase Bullen's Voyages. What's this?
+£4.50 UK Delivery or free UK delivery if order is over £35
(click here for international delivery rates)

Frank Bullen burst on the national and international popular literary scene at the end of the nineteenth century like a supernova which shone for the first decade or so of the next century and then was gone. But the memory of that brilliance lasts, like his fictional whaling epic, The Cruise of the Cachalot, into the present; this is a book still in print in any number of editions.

Bullen’s Voyages is a long overdue tribute to that memory, focusing on the sea career which is so prominent in his writing. Of the era of his youth he wrote that ‘those were the days when boys in Geordie colliers or East Coast fishing smacks were often beaten to insanity and jumped overboard, or were done to death in truly savage fashion, and all that was necessary to account for their non-returning was a line in the log to the effect that they had been washed or had fallen overboard’. It was a brutal world, and a close examination of maritime records shows that the bullying, two shipwrecks and the tropical illnesses he describes so vividly, really occurred before he was even fifteen; and those were just the start. Hardly a voyage passes without similar dramatic episodes. But disentangling truth from fiction is not always easy. At one level The Cruise of the Cachalot is undoubtedly fiction, and there are unanswered questions about his young life as a ‘street arab’, as he once described himself. Yet Rudyard Kipling could write in 1898 of Cachalot ‘it is immense… I’ve never read anything that equals it… such real and new sea pictures’. Though Bullen conceals the names of several of his ships, this new biography reveals their real identities, while the author carefully distinguishes the fact and the fiction through his sea-going career.

Bullen, who wrote more than thirty books, is second to none in his remarkable writing about the days of sail and the lives of merchant seafarers. A literary commentator writing in 1917, two years after his death, asserted: ‘Perhaps no writer has ever written so graphically or so sympathetically of the trials and dangers incurred by our merchant sailors than Frank Bullen, and his books today are a living witness to the courage and loyalty of our mercantile marine’. This elegant and highly readable biography is the first to describe his extraordinary life, and Bullen’s own vivid writing colours every page.

'Frank Bullen, the seaman’s seaman, has long needed a biographer. At last, he has a good one, and the salt gales blow from every page.’

ALSTON KENNERLEY was born into a seafaring family and his own early experience at sea included ten month’s service as a cadet aboard the German four-masted barque Passat. Later, after reading History at the University of Wales, Lampeter, he went into teaching and became Principal Lecturer in the Institute of Marine Studies at the University of Plymouth. He retired in 2000, since when he has maintained an active research portfolio in maritime social history.