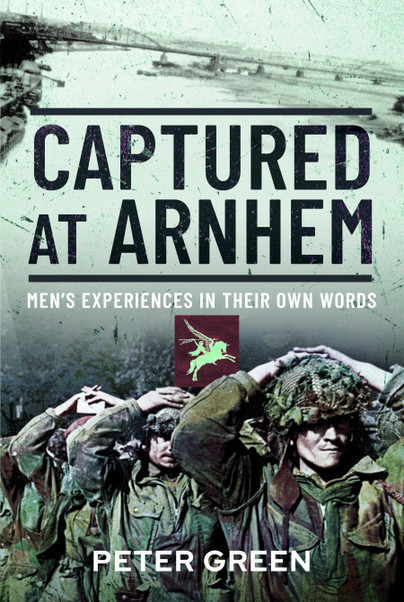 Men's Experiences in Their Own Words

Preorder
Add to Wishlist
You'll be £22.40 closer to your next £10.00 credit when you purchase Captured at Arnhem. What's this?
+£4.50 UK Delivery or free UK delivery if order is over £35
(click here for international delivery rates)

For the British 1st Airborne Division Operation Market Garden in September 1944 was a disaster. The Division was eliminated as a fighting force with around a half of its men were captured.

The Germans were faced with dealing with 6,000 prisoners in a fortnight; many of them seriously wounded. Somehow the men were processed and despatched to camps around Germany and German occupied eastern Europe. Here the men experienced the reality of the collapsing regime – little food and shrinking frontiers.

Once liberated in 1945 returning former prisoners were required to complete liberation questionnaires. Some refused. Others returned before ’Operation Endor’ to handle released men and their repatriation to Britain was in place. Around a third did. However the questionnaires that do exist give an picture of every day experience for the 2,357 of these elite troops’ time in captivity from capture to release.

They show that German procedures still operating, but that men were often treated inhumanely, when moved to camps by closed box cars and when camps were evacuated. Although their interrogators were interested in Allied aircraft and airfields, their interrogators were also concerned the effect of the new miracle weapons and with politics, how Germany would be treated after an Allied victory?

Nevertheless the airborne men’s morale remained high; carrying out sabotage at artificial oil plants, railway repairs, factories and mines. Some overcame their guards when being evacuated at the end of the War, in some cases joining the Resistance. They record help received from Dutch, French and German civilians.

Peter Green trained as a Graphic Designer and has worked in commercial and Government communications for 30 years. He established the Internet-based AlphaGalileo research news service for the media in 1998 and has seen it develop from a European government project into an independent company with global clients.

He has acted as a publicity consultant to the European Space Agency, produced a film in Romania and chaired a European publishing working group of development agencies.

His interest in military history was sparked by his father’s experiences whilst serving in The Border Regiment in 1st Airborne Division at Sicily, Taranto and Arnhem.

Now retired, Peter, remains a consultant to AlphaGalileo, but most of his time is devoted to editing the quarterly magazine of his father’s old Regimental Museum, Cumbria’s Museum of Military Life, in Carlisle. He also published an account of the evacuation march of his father’s German prison camp in the Spring of 1945, ‘The March East 1945’.

Peter’s interests extend to the Roman Army and natural history. He is a keen walker.