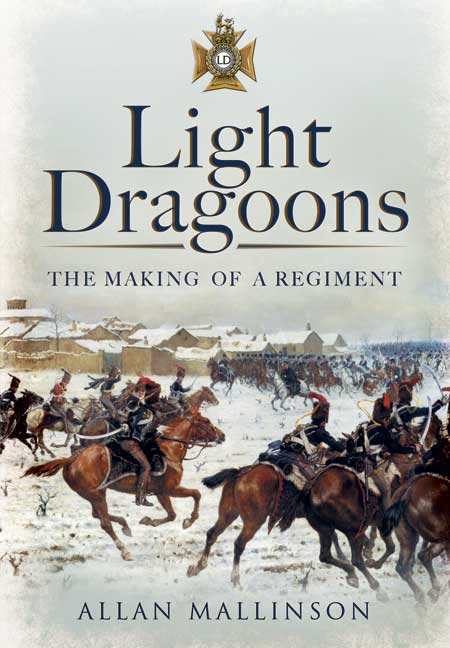 The Making of a Regiment

Click here for help on how to download our eBooks
Add to Basket
Add to Wishlist
You'll be £4.99 closer to your next £10.00 credit when you purchase Light Dragoons. What's this?
Need a currency converter? Check XE.com for live rates

Although only formed in December 1992, The Light Dragoons look back to a history that began in the days of the first Jacobite rebellion. In 1922 a reduction in the Army’s strength saw the amalgamation of four regiments of Hussars into the 13th/18th Hussars and the 15th/19th Hussars. Now they too have been amalgamated, with a name that reverts to the titles of the four original regiments in the eighteenth century. Allan Mallinson, the novelist and a former commanding officer of the 13th/18th Hussars, not only follows with admirable clarity and dexterity the fortunes of The Light Dragoons’ predecessors in this new edition, but describes the activities of the new regiment up to the minute. It is a crowded canvas which reflects much of the last two hundred and seventy years of British history. No campaign of significance has been fought in that time without the participation of one or more of the Regiments. Three, for instance, fought in the Peninsula, one in the Crimea and three in South Africa.

In the twentieth century they gained fresh honours in both World Wars and, since 1945, have been fully involved in Britain’s withdrawal from Empire, the Cold War, United Nations’ peacekeeping and Iraq and Afghanistan.

The new Postscript gives the reader a fine account of what wars in Bosnia and Iraq have involved for the Regiment and the men who serve in it and this updated history is a superb ‘snapshot’ of life in war and peace for a British armoured reconnaissance regiment. Light Dragoons takes its place among the classics of this genre such as Sir Arthur Bryant’s Jackets of Green and Rudyard Kipling’s account of the Irish Guards in the Great War.

This splendid title is sure to provide the reader with a fascinating insight into a rather special Regiment, which, although was not formed until as recently as 1992, can through its forbearer Regiments (13th,15th,18th and 19th Hussars), trace its history back as far as the early 1700’s at the time of the first Jacobite rebellion.

The Light Dragoons is an amalgamation of two former Regiments-the 13th/18th Royal Hussars and the 15th/19th Kings Royal Hussars - Regiments with both long and proud histories and a record of exemplary service to the crown. The were initially raised for reconnaissance and patrolling or scouting duties, however they quickly established a reputation for their daring and courage and in the early days, saw active-service in all corners of the world including India, North America as well as in Spain and Portugal. They fought under Wellington at Waterloo and took part in the famous Charge of the Light Brigade. In common with most British Regiments, at the end of the 19th century they went on to serve in India and South Africa and during the Great War, fought with distinction both in the trenches and on horseback. Further amalgamations took place in 1922 and during the Second World War, after being mechanized, were amongst the first tanks to land on French soil during the Normandy invasion. They subsequently fought through France, Belgium and Germany until the enemy surrendered in 1945. In more recent years, they formed a major part of the British Army of the Rhine and have seen active service in Malaya, Aden , Northern Ireland , Bosnia and Iraq.

Allan Mallinsons volume is not one of the traditional “stuffy” Regimental histories and as well as being an excellent read, will be invaluable to any researcher with an interest in either the present day Regiment or any of its constituents. It features many excellent colour as well as black and white photographs, together with full lists of both Commanding Officers through the ages and gallantry awards received. Information on weapons and equipment used will be useful too.

This certainly is a volume for a wide range of readers – from the casual reader to family history researchers, military historians and both former and present day members of the Regiment itself.

It is a story marked by the highs and lows, disaster and triumphs, of Britain’s military history, but is, above all, the story of the men who stoically fought in the tanks, gallantly lead the charge or fell uncomprehending in retreat.

The author tells a stirring tale as the regiments were involved in many of the conflicts across the world, which have kept the British Army very well-occupied for the last 300 years....Mallinson has a way with words which drives the story along and imparts knowledge painlessly. As a former Commanding Officer of 13th/18th Hussars, it is obvious that the author has a great respect and affection for the spirit and ethos of the Light Dragoons and also writes with deep insight and feeling.
The text is supplemented by a large selection of well-chosen photographs, as well as colour reproductions of paintings and cartoons, with no less than 24 maps of campaigns from the Napoleonic Wars to the Crimea, the Boer War to the Great War and the Second World War to the conflicts of the 21st century. A very useful appendix summarises the areas in which the constituent regiments have served since 1715 and also shows the changes of name since the first formation of Munden’s Regiment of Dragoons.