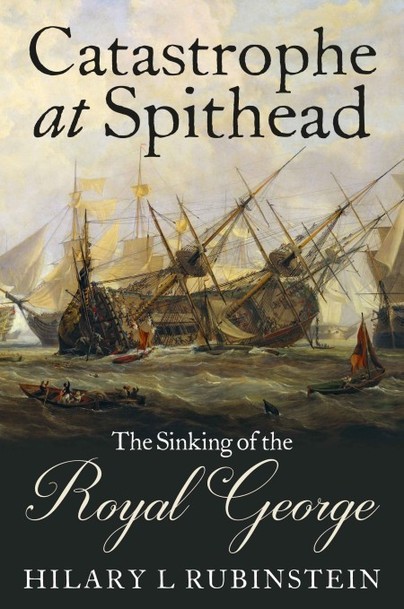 You'll be £9.98 closer to your next £10.00 credit when you purchase Catastrophe at Spithead. What's this?
Need a currency converter? Check XE.com for live rates

The book is therefore a must for anyone who is passionate about naval history, sinkings, the Royal Navy that in the 18th already dominated the seas and wants to know the story of an admiral for too long forgotten.

It is the inclusion of the human element alongside the narrative and analytical that makes this book, which is also well illustrated, so very readable. Highly and enthusiastically recommended.

This is a lovingly detailed account of a ship, her people and a cruel fate, in addition to granting us an utterly absorbing insight into the (pre-Nelsonic) Royal Navy.

A good read that reminds us that the past is not another country.

Hilary Rubinstein's in-depth research has successfully collated all the relevant information to explain why the 100-gun Royal George should have foundered on 29 August 1782 while at anchor between Portsmouth and the Isle of Wight... All the many information sources are highly referenced; Hilary can be commended for going to great lengths to cover all known possible sources. Her love of poetry is apparent as poems appear regularly throughout the book to enhance her prose.

This is an excellent book.

The whole book is an informative and abosrbing read and is highly recommended.

With meticulous scholarship aided by diagrams and pictures (including a fine section of color illustrations) this is and will long remain the authoritative text on both Admiral Kempenfelt and the Royal George.

Rubinstein has written what is surely the definitive account of the sinking of the Royal George. She leaves some mysteries open to other interpretations because they cannot now be solved, but her research and analysis of the evidence puts her conclusions in the high probability category. Rubinstein’s character sketches of the main players and her discussion of the many disparate factors surrounding the disaster are confidently handled, as is her potted biography of Kempenfelt. She is supported by an interesting array of colour plates, including John Schetky’s dramatic painting of the disaster, and adds copious endnotes and a first-rate bibliography. That all combines to make The Sinking of the Royal George an entertaining and thought-provoking read.

Here is a book with a lot of appeal for those interested in the Royal Navy, the Age of Sail, and shipwrecks. I would have preferred to learn more about the ship’s history and less about the admiral’s career. Events are described clearly and without technical jargon. Anyone fortunate enough to read this book will gain a complete understanding of this historical event and the tragedy that ensued.

Regrettably my knowledge of naval history precluded me from knowing about the sinking of the Royal George at Spithead but I am mighty pleased to have reviewed this book and to have made some progress to advancing my education. It is much more than a narrative of what happened. It is part detective story, part reputation rehabilitation, part naval engineering and part chemistry in its search for what really happened. As with all such investigations it benefits from hindsight and modern knowledge which is brought to bear on the mystery. A very readable book written in a relaxed style and it actually becomes a real page turner.