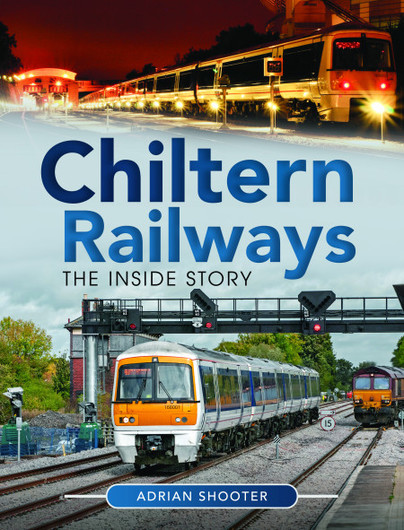 Click here for help on how to download our eBooks
Add to Basket
Add to Wishlist
You'll be £15.59 closer to your next £10.00 credit when you purchase Chiltern Railways. What's this?
Need a currency converter? Check XE.com for live rates


This is the story of a train operating company which became one of the major successes of railway privatisation in Britain, told by the man who led Chiltern Railways from his appointment as director designate in 1993 through the management buyout in 1996 and the development of the franchise until his retirement as Chairman in 2011.
By way of introduction the author gives a frank personal description of the way in which rail privatisation was envisaged and executed. His view is that it was bungled by civil servants, accountants and lawyers who had no understanding of what running a railway meant. Then he shows how a high-level vision of a privatised Chiltern was developed into a long-term plan. The main part of the book describes how this plan was executed.
What made the Chiltern approach to their franchise different was that it was based on expansion, rather than the status quo, and it was developed by people familiar with the railway industry. Shooter understood people and he achieved staff backing to deliver a service focussed on what passengers wanted – a safe railway, with comfortable trains running frequently and on time, improved car parking, ticketing and stations. The narrative shows how innovative Chiltern was and lifts the lid on much of the background work that Shooter and his team did to achieve success, winning a twenty year franchise extension on the way. Projects given the ‘inside story’ treatment include new class 168 Clubman trains, Parkway stations at Warwick and Aylesbury Vale, extensions of services to Kidderminster and Oxford, reinstating double-track between Princes Risborough and Aynho Junction, reopening the terminal platforms at Birmingham Moor Street and adding two new platforms at Marylebone. A chapter on safety includes the aftermath of the 2005 Gerrards Cross tunnel collapse and bridge bashing problems.
This is a lively and readable book, attractively presented in a large format and well-illustrated with photographs, letters, and documents that directly supplement the text, although some captions lack sufficient detail. There is no index or bibliography, but the nature of the work makes the latter unnecessary. Shooter presented the 2013 Clinker Lecture about Chiltern Railways and the privatisation process (published in RCHS Journal No 220, July 2014) and this book extends his direct and forthright approach to the subsequent development of Chiltern. As the personal view of a successful career railway manager, it gives a unique insight into the political and business machinations involved in railway privatisation in general, and Chiltern in particular. Many of the author’s candid observations about various railway, business, legal, academic and political figures and organisations are critical, but he also gives praise where it is deserved, including to Labour politicians John Prescott and Andrew Adonis – and that from a lifelong Conservative. The nature of the book means that it does not present a balanced view, but it is a fascinating story and essential reading for those interested in recent railway history. With its profuse illustrations it should also have an appeal to the wider public as well as railway professionals and enthusiasts.

This is not a book for someone looking for in depth profiles of the Chiltern rolling stock, although they do of course feature briefly where appropriate, but a book for someone who is interested in finding out how and why decisions were made and how those decisions were delivered. It does not matter if you agree with rail privatisation or not this is a fascinating and excellent read which is difficult to put down. A well-chosen selection of excellently reproduced photographs and maps accompany the text. Overall this is a quality, well written and presented hardback book which is easy to recommend and good value at the RRP.