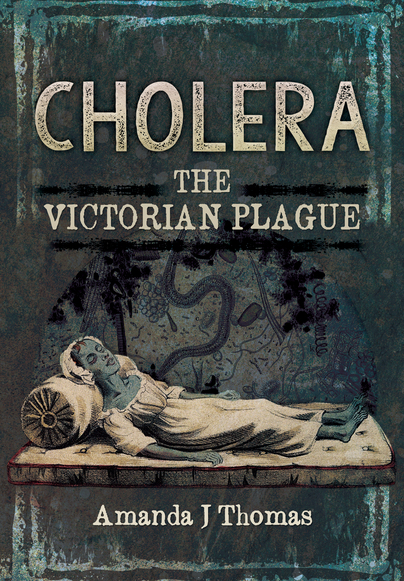 You'll be £19.99 closer to your next £10.00 credit when you purchase Cholera. What's this?
+£4 UK Delivery or free UK delivery if order is over £30
(click here for international delivery rates)

Discover the story of the disease that devastated the Victorian population, and brought about major changes in sanitation. Drawing on the latest scientific research and a wealth of archival material, Amanda Thomas uses first-hand accounts, blending personal stories with an overview of the history of the disease and its devastating after-effects on British society. This fascinating history of a catastrophic disease uncovers forgotten stories from each of the major cholera outbreaks in 1831-3, 1848-9, 1853-4 and 1866.

Amanda Thomas reveals that Victorian theories about the disease were often closer to the truth than we might assume, among them the belief that cholera was spread by miasma, or foul air.

Of all the epidemic diseases that threatened nineteenth-century Britain, it was cholera with its rapid and violent assault on the body that was the most feared. The period saw four major epidemics: 1831-32, 1848-49, 1853-54, with the last in London’s East End in 1866. Rather than isolated events they were part of global pandemic outbreaks. Although not her first popular history of cholera, the need to understand how the disease spread to Britain, and how endemic cholera became epidemic, informs Thomas’s hypothesis in this book: that the arrival and spread of cholera was facilitated by boats, ships and barges transporting people and goods along waterways. She combines this proposition with a clear statement of the importance of integrating environmental factors in understanding cholera epidemics.

Any historian of the nineteenth century will be able to refer to many outbreaks of Cholera, not out in the colonies, but here in Britain, and more importantly amongst the poor in the slums. There is not just one singular example, but many, whether in London, Manchester or Edinburgh, there are many reports and sadly deaths from Cholera.

Amanda Thomas in the first chapter of the book gives a brief synopsis of the history and the epidemics that it has caused. Cholera was feared especially in the nineteenth century and even caused unrest in 1820, but as an ancient disease it has always had the ability to cause fear as its reputation as a killer.

Thomas deals with the state of the poor and the terrible sanitary conditions that the poor lived in within the slums. How with the density and poor housing, along with the poor sanitation, the overcrowding, the influx of migrants along with the carbon and chemical emissions from both home and factories, all added to the shortening of lives. By doing this, she is setting the scene in which cholera could flourish especially during the Industrial Revolution.

This is an interesting book for all those who are interested in the lives of the poor in the nineteenth century and how disease affected them and took many lives early. As Thomas states in her conclusion ‘Cholera was the plague of the Victorian era…’ but given the right circumstances could return. This is an engrossing read, thought provoking and challenging and a bright light on somethings the elites would have rather forgotten.

A fascinating take on a well-worn era.

The Victorian era is most remembered as the period when the British Empire expanded rapidly, national wealth increased, and innovation was order of the day. There was another dark side to the era and the author has made a very capable job of addressing the Victorian Plague and the efforts to contain and eliminate it. The subject may not be the most attractive but this book presents the situation in a very readable form, with good bibliography and photo-plate section. Recommended.

This finely written and presented book tells the story of cholera, the disease that scourged the people of Victorian times. Yet this pestilence had a positive side as it led to major changes in sanitation.

Amanda Thomas is a skilled and likeable writer. She draws on first-hand accounts, the most up-to-date scientific research, and archival material to draw together an informative and very readable narrative.

Amanda’s research and writing is first class and this book would make a great subject for a documentary, no higher compliment can I pay it.

'This fascinating book will appeal to both general and social history enthusiasts, taking a new, accessible approach to a topic previously covered predominately by academic researchers.'

Discover the story of the disease that devastated the Victorian population, and brought about major changes in sanitation. Drawing on the latest scientific research and a wealth of archival material, Amanda Thomas uses first-hand accounts, blending personal stories with an overview of the history of the disease and its devastating after-effects on British society.

This book is an engaging and robust study of cholera epidemics. It provides a clear, comprehensive illuminating understanding of the disease from a historical, geographic, demographic and climatic perspective, not forgetting the lack of sanitation prevailing at the time. The functioning of the organism at cellular and genetic level is also revealed, with prospective studies proceeding apace.

The book is a fresh approach to the history of Victorian Britain and the consequences of cholera for nineteenth century society. Amanda explains the story of the disease that devastated the Victorian population from the 1830s to the 1860s and brought about major changes in sanitation. Drawing on the latest scientific research and a wealth of archival material, the book includes first-hand accounts and blends personal, forgotten stories with an overview of the history of cholera and its devastating after effects on British society.

Amanda also reveals that Victorian theories about the disease may be closer to the truth than we might assume and that contaminated drinking water and human transmission may not be the whole story. The book acts as a complete overview of cholera in Victorian Britain, taking a new, accessible approach to a topic previously covered predominately by academic researchers. It has received outstanding reviews from historians such as Nick Barratt and Lee Jackson and is well worth the cover price of £19.99.

As featured in the Herts Advertiser thrilling, powerful and extraordinary account of the deadly strain of Cholera which spread through Britain in the mid-1800's, which has received rave reviews from a number of historians and experts, including Dr Nick Barratt.

As a local and family historian I found this book to be a fascinating insight into a disease often overlooked in today’s history books. One of my own ancestors died in the epidemic which broke out in Sheffield in 1831 and any search of the parish registers for the period 1831-33, (and the three further outbreaks in the mid 1800’s), reveal not just a high infant mortality rate but that of the population as a whole.

Cholera has been around for far longer than just the Victorian period but after such epidemics as the Black Death and later plagues it is to the author’s credit that she has seen fit to include the disease as a plague in its own right. Perhaps a hundred years from now a yet to be born writer may well do the same with today’s modern day equivalent plague of cancer?

The book covers the history of cholera in 16 pages and then focuses on the outbreak of 1831/2 when, initially, brandy was touted as a potential cure! The living standards and hygiene of the times and workhouse conditions are related in the following chapters as we learn about the devastating effects of the disease. We then move on to Dr John Snow who discovered that cholera was a waterborne disease through his research into the Broad Street Water pump in Westminster. This is followed by an examination of the improvements made to sewerage disposal in London and finally a look at the continued outbreaks of cholera around the world.

It is to be hoped that the author’s ominous last paragraph does not become reality:

Given the right circumstances, cholera could make an unwelcome return in the twenty-first century.

This book is an excellent insight into an often neglected subject, meticulously researched, well written and highly readable and includes an exhaustive sections of notes enabling those who wish to delve much deeper into the subject.

A well-researched history of the impact of cholera on British society.