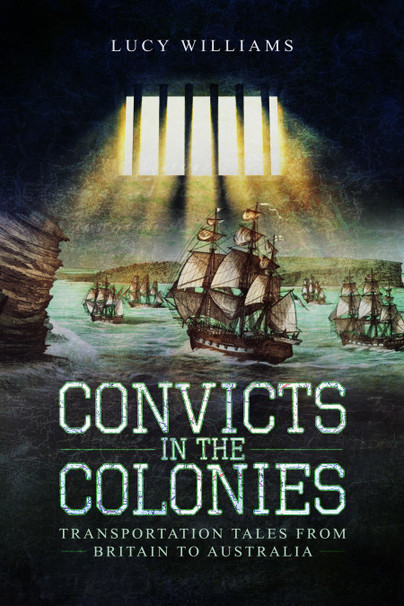 Convicts in the Colonies (Paperback)

Transportation Tales from Britain to Australia

Add to Basket
Add to Wishlist
You'll be £12.99 closer to your next £10.00 credit when you purchase Convicts in the Colonies. What's this?
+£4.50 UK Delivery or free UK delivery if order is over £35
(click here for international delivery rates)

In the eighty years between 1787 and 1868 more than 160,000 men, women and children convicted of everything from picking pockets to murder were sentenced to be transported ‘beyond the seas’. These convicts were destined to serve out their sentences in the empire’s most remote colony: Australia. Through vivid real-life case studies and famous tales of the exceptional and extraordinary, Convicts in the Colonies narrates the history of convict transportation to Australia – from the first to the final fleet.

Using the latest original research, Lucy Williams reveals a fascinating century-long history of British convicts unlike any other. Covering everything from crime and sentencing in Britain and the perilous voyage to Australia, to life in each of the three main penal colonies – New South Wales, Van Diemen’s Land, and Western Australia – this book charts the lives and experiences of the men and women who crossed the world and underwent one of the most extraordinary punishment in history.

I really enjoyed this book. Social history isn't usually my go-to, but I found this an easy and enjoyable read. The book generally takes a sympathetic view to the people and stories it tells, and is written in a way that allows you to put yourself in their shoes. This month I am travelling to WA and NSW and am excited to see some of the places discussed in the book. It is clear that an immense amount of research has gone into this book and it pays off.

The author, Lucy Williams has done a remarkable job presenting the fact and data of these stories in a professional manner. In all seriousness, what other way can you present it! As historians and professionals, story tellers and researchers must stick to the truth, fact, and data and let the reader’s imagination take flight. That is the beauty of this kind of research and story! I thought it was a fantastic and compelling read.

Lucy Williams has created an intriguing work that is perfect from not only historians, but true crime lovers.

I recommend the book to anyone wanting a general background in the convict experience. Those researching a convict ancestor will find the the inclusion of a guide to resources particularly helpful.

Anyone with an interest in the development of Australia or the transportation of convicts can learn from this text and enjoy the up-close look at the individuals whose own words are used to describe what they saw and experienced.

Eye-opener of a book.

Article: 'Banished for life – for stealing a cart horse'

Many of the stories were horrific, while a few had happier endings. It really was a test of character and the ability to adapt under severe circumstances. Overall, an interesting read in a period of history which saw the development of the white man in Australia.

This is undoubtedly a ‘sincere’ book, written to explain a complicated situation and doing it well.

Article: Banished for life – for stealing a cart horse as featured by

The author charts the journey of criminals from court to colony during the eighty years of transportation from Britain to the Australian colonies. The biographies she presents show the variety of causes for transportation, the conditions in which people were kept before and during transportation, and the different outcomes for transportees. Some did well in Australia becoming wealthy and well-known once they received their freedom, but most lived in obscurity, or were in and out of the penal system as they may have, had they stayed in Britain.

I enjoyed this book and found the stories very affecting. I also enjoyed the detailed descriptions of life in prison, hulks, ships, penal colony and free life in colonial Australia.