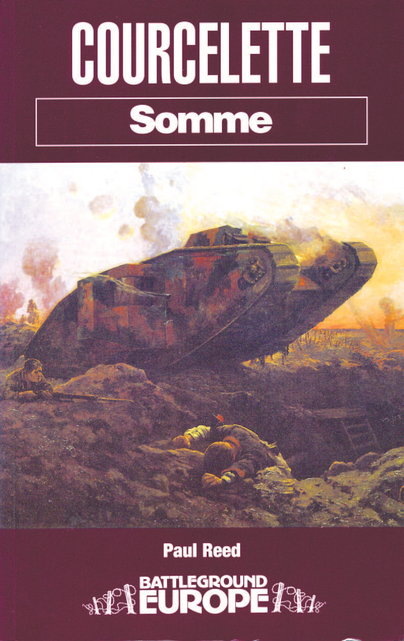 Click here for help on how to download our eBooks
Add to Basket
Add to Wishlist
You'll be £4.99 closer to your next £10.00 credit when you purchase Courcelette. What's this?
Need a currency converter? Check XE.com for live rates

Courcelette is one of the many Somme villages that became a German stronghold in their tenacious fight to keep the British armies at bay. Well behind the lines on 1 July, it came into prominence on 15 September when it fell to an attack by the Canadians.

In detail, this book provides an excellent account of this phase, given the important part of the war by integrating so many inspiring personal stories. The Mark I was crewed by an officer and seven men. Six tanks from No 1Section of C Company Heavy Section were allocated to the Canadian Crops for the attack on Coucelette, commanded by Captain A.M. Inglis, a regular army officer formerly of the Gloucestershire Regiment.  His tanks was hit and one of the tail wheels used for steering was blown off. There is a fascinating account of these events written by Inglis himself. Inglis and his crew returned without injury and assisted in the advance on the Sugar Factory. Next to this story there is a photographs of Inglis standing proudly by his tank at Cambrai, November, 1917. The Courcellete Sugar Factory attack story is complimented by outstanding diagrams, one whos the intelligence plans of the extensive area which was issued to Inglis and his men. The story further brings in the heroism of Lieutenant Colonel Cantlie whilst leading an attack on Sugar Trench. He was his by a piece of shell fragment which painfully bruised his forearm. There is also an excellent aerial photograph showing Sugar Trench and the direction of Courcelette.

What makes these books so special for any battlefield visitor, armchair researcher – or both – is that they so vividly narrow down complex battlefield stories in manageable chunks so that the reader can understand the larger actions alongside the more smaller ones. In turn, the personal stories bring to life the inspiring stories of heroism that can all be relayed whilst actually visiting the battlefields on the ground.

A further fascinating story is that of Jimmy Richardson during the fighting near Regina Trench during the Battle of Ancre Heights.  He had left his pips behind Regina Trench and turned back and ran for them and was never seen again.  He was later awarded the Victoria Cross .