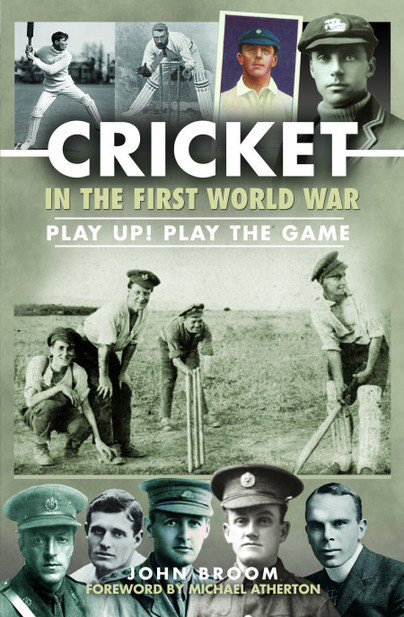 Play up! Play the Game

Add to Basket
Add to Wishlist
You'll be £20.00 closer to your next £10.00 credit when you purchase Cricket in the First World War. What's this?
+£4.50 UK Delivery or free UK delivery if order is over £35
(click here for international delivery rates)

As Europe descended into war over the summer of 1914, cricket in England continued as it had for the preceding few decades. Counties continued with their championship programme, clubs in the North and Midlands maintained their league and cup rivalries whilst less competitive clubs elsewhere enjoyed friendly matches. However, voices were soon raised in criticism of this ‘business as usual’ approach – most notably that of cricket’s Grand Old Man, W.G. Grace. Names became absent from first-class and club scorecards as players left for military service and by the end of the year it was clear that 1915’s cricket season would be very different.

And so it would continue for four summers. Rolls of honour lengthened as did the grim lists of cricket’s dead and maimed. Some club cricket did continue in wartime Britain, often amidst bitter disputes as to its appropriateness. Charity matches were organised to align the game with the national war effort.

As the British Empire rallied behind the mother country, so cricket around the world became restricted and players from far and wide joined the sad ranks of sacrifice.

Cricket emerged into the post-war world initially unsure of itself but the efforts that had been made to sustain the game’s infrastructure during the conflict ensured that it would experience a second golden age between the wars.

There is a nice Memoriam section at the back of the book that feels quite fitting, I should also say that there is an excellent sources section too that spans the globe, ideal for those interested in further reading. This book has been very well researched and written and I really enjoy a John Broom cricket book.

What I liked about this book was the descriptions of what happened to individual players, where they served, and how service affected their playing careers, Including the lad who lost an arm, yet still managed a first class cricket career after the War.

'As with The Grim Test, Play Up and Play the Game! is highly recommended.'