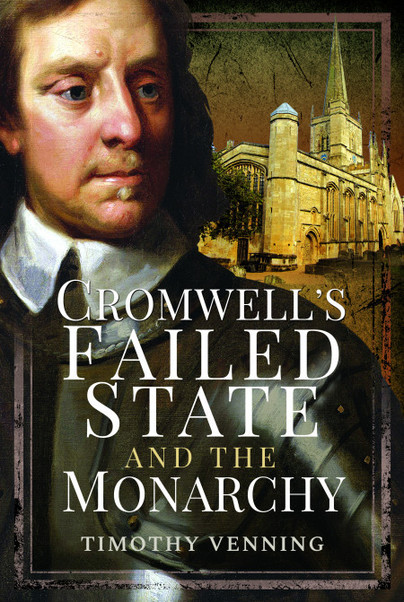 Add to Basket
Add to Wishlist
You'll be £15.00 closer to your next £10.00 credit when you purchase Cromwell's Failed State and the Monarchy. What's this?
+£4.50 UK Delivery or free UK delivery if order is over £35
(click here for international delivery rates)

Order within the next 7 hours, 17 minutes to get your order processed the next working day!

Regicide, military dictatorship, war and rumours of war, opposition from all sides and collapse of a 'failed state': such is the story of Oliver Cromwell's unique experiment in the governance of Britain, following the English-British Civil Wars. The British state of the Three Kingdoms of England, Scotland and Ireland were united in the Protectorate, with Cromwell as Lord Protector, 1649 to 1660, but collapsed under the weight of huge turbulence and problems from all sides - political and religious, constitutional, foreign military and naval threat, even from the Dutch, the Protectorate's natural ally. Finally, with Cromwell's death in 1658 - the 'heroic' Cromwell - and succession of the hapless Richard Cromwell, the 'failed state' collapsed with the restoration of the Stuart dynasty, in 1660 and royal, aristocratic and gentry rule.

"Readers who are aware of what the book does offer can dip in with profit."

For any enthusiast of Cromwell, the events surrounding the Civil Wars, and its aftermath, this book will be an invaluable addition to the bookshelf.

The English Civil War started as a conflict between Monarch and Parliament and ended in confusion and an experiment in dictatorship. This is story of the conflict which changed England and Britain. – Very Highly Recommended

A really good accounting of the English Revolution and why it failed without Cromwell. A must read for English history readers.

This is a really interesting book for me - I'm familiar with Cromwell from such historians as Lady Antonia Fraser, and have always held him in the highest regard. I am aware of his various faults, but despite these, I have always thought that he was the best thing to happen to this country at that particular time. Timothy Venning doesn't change my mind about him, but it does give me pause for thought.

The post civil war period, Cromwell and the Protectorate is a boring period of English history? This book ensures that nothing could be further from the truth. Behind the dire and suffocating Protestantism is revealed a cast of characters; a monarch who plays off the factions once too often, revolutionaries struggling with creating a new state, army officers who have crossed the moral divide and substituted service for rule, and an awakening of the value of individual thought in politics in ways that will been seen in the French and Russian revolutions. Those who do not conform to the narrowing options become evicted from power as the regime struggles to gain moral authority. That cast of characters is made alive by the author as he describes the shifting alliances and the decisions of men driven by a mixture of ambition and self preservation. Sitting in centre stage is Cromwell, the tortured presence whose inability to properly gain that moral authority inevitably drives him to take personal control and responsibility in the absence of suitable qualities in those around him and against him.
This is a compelling read.