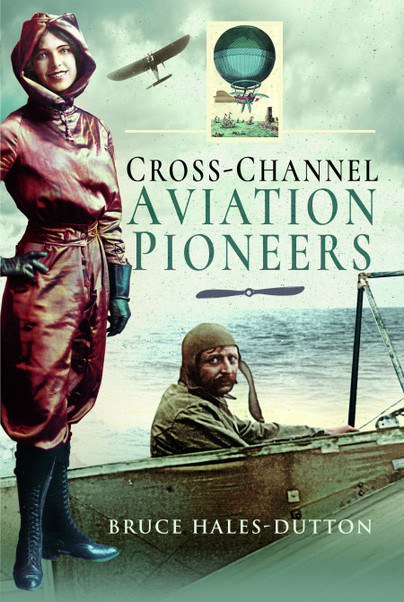 Blanchard and Bleriot, Vikings and Viscounts

An article written by the author for Dan Snow's History Hit: 'Who Were the Cross-Channel Aviation Pioneers?'

You'll be £25.00 closer to your next £10.00 credit when you purchase Cross-Channel Aviation Pioneers. What's this?
+£4.50 UK Delivery or free UK delivery if order is over £40
(click here for international delivery rates)

On 25 July 1909, a dapper, moustachioed Frenchman flying a flimsy, diaphanous aeroplane changed the status of a great nation. ‘England is no longer an island,’ declared the Daily Mail. Lord Northcliffe, the newspaper’s proprietor, had put up the £1,000 prize for the first flight of the English Channel by the pilot of an aeroplane.

In securing the prize for one of aviation’s most celebrated firsts, Louis Blériot had beaten his Anglo-French rival Hubert Latham. Six days earlier, Latham had become the first airman to make a forced landing on water when the engine of his elegant Antoinette monoplane failed while he was attempted the crossing.

In this book the author explores the many and varied milestones in cross-channel flight, beginning back in July 1785 when John-Pierre Blanchard and John Jeffries made the first crossing, by balloon. Other flyers quickly followed Blériot so that Pierre Prier made the first non-stop London-Paris flight in April 1911 and Harriet Quimby became the first woman to fly the Channel a year later.

The book will chart other significant events in cross-Channel aviation such as the first mid-air collision between airliners flying between the UK and France, which led to a rudimentary system of air traffic control, the popularity of car ferry services in the 1950s and 1960s, and the coming of the jets.

Other big changes were on the way. In 1994 Eurostar rail passenger services from London using the Channel Tunnel were launched. In October 2001, following chronic air traffic delays during the late 1980s, the European Commission adopted proposals for a Single European Sky but it comes as no surprise to learn that during the second decade of the 21st century this has become bogged down in intra-European politics.

Of Cross-Channel aviation pioneers the only one widely remembered is Bleriot, for his successful crossing from France to Britain in a monoplane of his own design and construction, but the authors have done a great job of recording the process, from balloons, to hovercraft, to electric aircraft. The first person to be recorded as doing something new is often the only one to be remembered but there are so many more we should know about. – Most Highly Recommended

This unsolicited book was a joy to read. Well researched and written with style.
Its title tells you what it contains: a history of cross-channel flights from 1785 (!) to 2019 together with potted histories of notable individuals and aircraft types.

This 220 page hardback is a sometimes light hearted account of the many varied and record-setting flights across the English Channel since Louis Bleriot first achieved it in 1909. A highly entertaining read, it does include some rotary-wing successes, including the first Cierva Autogiro crossing, and the first helicopter crossing at the end of the Second World War. Alas it doesn’t include the speed record set up in 1980 – by the Aerospatiale Dauphin which is still held today.