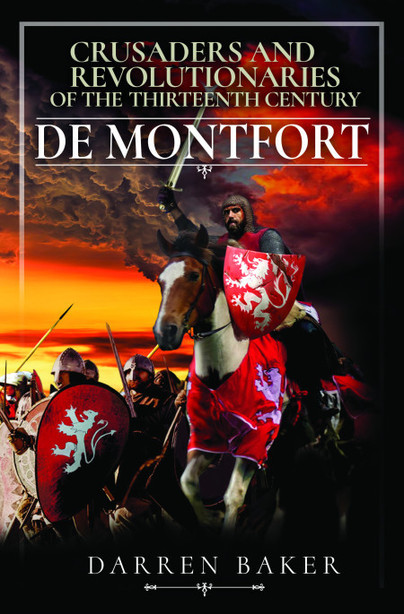 Crusaders and Revolutionaries of the Thirteenth Century (Hardback)

Add to Basket
Add to Wishlist
You'll be £25.00 closer to your next £10.00 credit when you purchase Crusaders and Revolutionaries of the Thirteenth Century. What's this?
+£4.50 UK Delivery or free UK delivery if order is over £35
(click here for international delivery rates)

I had been drawn to the de Montforts many years ago, long before this book was quite possibly conceived, so was immediately attracted to the fact that the focus of this was on the family themselves, particularly as pertaining to the remnants of the family post Evesham. Baker successfully weaves all the strands and threads of this family's history together into one tome.

The de Montforts ended how they began, in obscurity. But whilst in the ascendant, they were the Icarus of their generation - flying that little bit too close to the sun. This is one tome that I will definitely be adding to my own library.

The author has provided an absorbing account of the family’s rise and fall with a very interesting colour plate section in illustration. He discusses the crusades of the thirteenth Century which were a major part of the history of the period and provided wealth and advancement for many.

This is the first book to provide a complete family history. – Very Highly Recommended

If you want to read about English or French history of the 13th Century, this is the book for you. Also, this is a very detailed book about the crusades, at least about one of the major families involved. I am VERY happy that I had the chance to read this book, and think that it might be a helpful reference for me.

A magnificent biography of one of the most infamous families of Medieval Western Europe. Loathed by the English, hated by the French (especially in the South), the Montforts deeds and misdeeds over almost two centuries are skillfully presented from their despicable behaviors during the Albigensian Crusade to their open revolt against Royal power in England. A colorful and truculent portrait of a rebellious clan & its often violent actions against the central powers. A richly detailed and turbulent tapestry of Medieval pride and arrogance. A must read for anyone interested in Medieval history.

This is a compelling read about one of Britain’s most notorious families in this period of history, and it’s set against the backdrop of the Crusades and the Baron’s Wars. I’d definitely recommend this to anyone considering delving into the period as a wargamer.

The book will give you a good insight into the machinations of the period as well as the conflicts in the UK and the Middle East. It’s also a great read for anyone interested in the medieval period, and especially those interested in learning more about the Montfort’s.

A fantastic book about the De Montfort family and the rebellion against the monarch Henry III and the eventual decline of the family standing and power. There has been some good deep research put into this book that stands out and covers not just the rebellion against Henry III but also includes great detail about English and French history of that particular time considering this was a time when the countries were going through the period of the Crusades. Whilst this particular part of history isn’t my specialist subject, from what I have read this is a great book and really emphasises the conflict and growth of the family and supporters. An excellent book written by Darren Baker, very well researched and written. A very good book, certainly recommended.

Darren Baker turns in an excellent history of the de Montfort family - everyone has heard of Simon de Montfort and of his attempt to dethrone Henry III. An exemplary look at one of the most dominant aristocratic families in the medieval period.

This is an excellent narrative history of the De Montfort family and their position within the rivalries and the alignments that characterised the medieval period. Clearly the family was one to be reckoned with and has a place in the slow evolution of rule by agreement rather than by divine right.