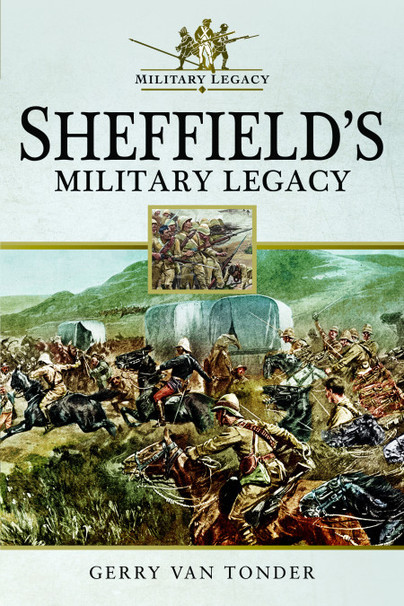 Click here for help on how to download our eBooks
Add to Basket
Add to Wishlist
You'll be £4.99 closer to your next £10.00 credit when you purchase Sheffield's Military Legacy. What's this?
Need a currency converter? Check XE.com for live rates

In the century following the Norman invasion, a castle was built at the confluence of the rivers Sheaf and Don, an early recognition of Sheffield’s strategic importance. Destroyed in the thirteenth century during the Second Barons’ War, a second castle was built on the site, but in 1647, it was ordered to be demolished immediately after the cessation of the Civil War, thereby negating any future tactical use by either Parliamentarian or Royalist.

Steel production and downstream manufacturing would, however, be perpetually embedded in the military legacy of this seat of industrial innovation and production. The Vickers steel foundry was established in Sheffield in 1828. Following the manufacture of the factory’s first artillery in 1890, Sheffield expanded to find itself a leading supplier in the First World War, feeding the military with shells, artillery, naval guns, armour plating, aircraft parts, torpedoes, helmets and bayonets. Sheffield’s contribution to the British war machine in the Second World War quickly attracted the attention of Nazi Germany. In December 1940, in an operation appropriately codenamed Schmelztiegel, or Crucible, Sheffield suffered two major raids aimed primarily at steel and munitions factories.

A proud tradition of answering a call to the colours spawned the 84th Regiment of Foot, the Loyal Independent Sheffield Volunteers of the 1700s, the Hallamshire Rifle Volunteers raised in 1859, and the Sheffield Squadron, Yeomanry Cavalry. The 1899–1902 Anglo-Boer War would also have an enduring legacy: the Sheffield Wednesday football stadium was named Spioen Kop, while local road names include Ladysmith Avenue and Mafeking Place. On 1 July 1916, the Sheffield City Battalion fought in an heroic and costly, but hopeless, action on the Somme to capture the village of Serre. Through the Second World War right up to Afghanistan, Sheffield’s men and women in uniform have not been found wanting.

Sheffield’s rich military legacy portrayed in this publication is drawn from a cross section of representative units, home and foreign actions, uniformed personalities, barracks at the hub of musters, the calibre of gallantry – including six Victoria Crosses – as well as the immortality of names on memorials, such as the Sheffield Memorial Park in France.

A basic book to learn about the importance of the City of Sheffield in history.

The latest volume in Pen and Sword's brilliant Military Legacy series looks at the city of Sheffield and how its men and women answered the call to arms down through the ages.

I have visited Sheffield on many occasions, but have never visited the military monuments that are in the city. This book has pricked my interest and the next time I visit Sheffield I will endeavour to find these treasures. I found this book to be well set out, with lots of interesting information charting the history of Sheffield’s military.

I particularly like the chapter ‘For Valour’ - in this chapter the author describes stories of courage and daring that resulted in the awarding of The Victoria Cross. If you are interested in the historical history of England’s cities then this would make a good addition to any collection.

Article: New book looks at centuries of Sheffield's military history as featured in