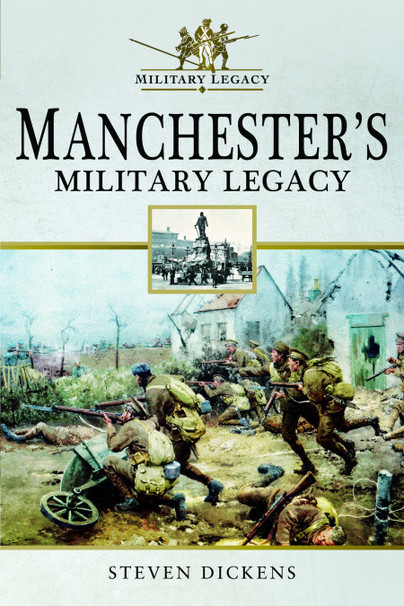 Click here for help on how to download our eBooks
Add to Basket
Add to Wishlist
You'll be £4.99 closer to your next £10.00 credit when you purchase Manchester's Military Legacy. What's this?
Need a currency converter? Check XE.com for live rates

The establishment of the Roman fort of Mamucium in AD79 is the first known record of any military construction, or presence, in the area that is now the Castlefield district of the city. The Roman auxiliary units posted here used the fort as a garrison, located at Mamucium for the purpose of protecting the Roman road from Chester (Deva Victrix) to York (Eboracum). The site was previously occupied, as a defensive hill fort, by the ancient Britons, or Brigantes, who were native to the area.

The next epoch of military activity at Manchester occurred in the Civil War and the Siege of Manchester in 1642. Manchester’s declaration as a Parliamentarian town had far-reaching consequences, in terms of its military legacy, on the voting rights of Mancunians. Upon his restoration Charles II removed Manchester’s two MPs from Parliament and Manchester was not to receive any political representation until the Reform Act of 1832.

The Peterloo Massacre, of August 1819, was the scene of a mass rally brought about by a desire to repeal the Corn Laws, introduce universal suffrage and reform other repressive legislation. The cavalry charge which resulted in the deaths of an estimated eighteen innocent protesters and the wounding of over 500, took place at St. Peter’s Field (now Square) in the heart of the city. Its legacy resulted in the establishment of the Manchester Guardian and the rise of radical free-thinking in the city, not always welcomed by those in authority.

Both World Wars have had a profound influence on the city. The establishment of the Manchester Regiment is detailed and later the Manchester Pals are recalled through the pages of the local press. Heaton Park became their base, whilst General Kitchener visited the city, in order to boost recruitment. Later the Luftwaffe’s bombing campaign of December 1940, the Manchester Blitz, left the city with a legacy that has changed it beyond all recognition into the twenty-first century.

Pen and Sword's Military Legacy series continues with a look at Manchester, which was the site of the first recorded Roman military installation, in AD79. Fast forward to the English Civil War, when Manchester declared for the Parliamentarians, as a result of which, Charles II removed the town's two MPs. Then there is, of course, the Peterloo Massacre, recently encapsulated and celebrated in the recent movie, and on to the Great and Second World Wars. Manchester's military legacy is celebrated brilliantly in Steven Dickens's brilliant new book.

A basic book to learn about the military importance of the City of Manchester in history.

The author has provided a detailed description of the military legacy of Manchester. This includes one of its least edifying incidents, the Peterloo Massacre, were Corn Law demonstrator were charged by the cavalry, killing 18 and wounding more than 500 peaceful demonstrators. As with the other books in this excellent series, there are many illustrations, including some in full colour and some very rare images.

I found this book to be well presented, and in an easy to read format. Full of really interesting information, with varied photographs depicting the evolution of the city’s military. This is the type of book you would pick up if you went to a museum or if you are a collect of military history books.

Steven Dickens is from the Flixton area of Trafford, in Manchester, and is married to Sarah. They have three sons and three daughters. He is a retired Charge Nurse and College Lecturer, with an academic background in modern history, and a BA. Hons degree in History from Sheffield University; an MA in Twentieth Century History from Liverpool University; and a Postgraduate Certificate in Education from Manchester Metropolitan University. His Registered General Nursing qualification was gained at Trafford General Hospital (formerly Park Hospital), in Davyhulme, Manchester and he has twenty years of experience in nursing and teaching. He has always had an interest in local history, genealogy and archaeology, with experience of working in Roman archaeology for the Greater Manchester Archaeological Unit at Manchester University. Steven has written several journal and magazine articles on these subjects in the past, as well as writing and publishing several local history titles. He has also given talks to local history societies and schools on these subjects.