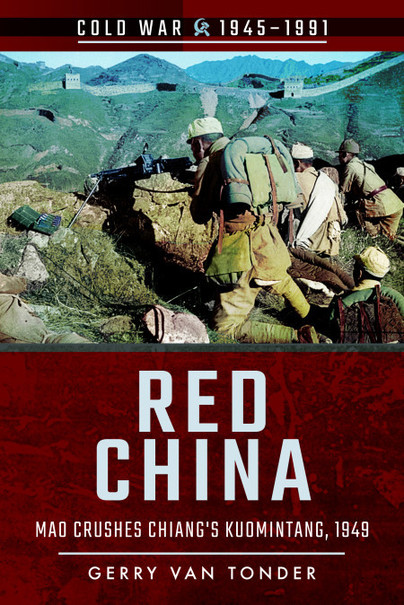 Add to Basket
Add to Wishlist
You'll be £14.99 closer to your next £10.00 credit when you purchase Red China. What's this?
+£4.50 UK Delivery or free UK delivery if order is over £35
(click here for international delivery rates)

It is more than 25 years since the end of the Cold War. It began over 75 years ago, in 1944 – long before the last shots of the Second World War had echoed across the wastelands of Eastern Europe – with the brutal Greek Civil War. The battle lines are no longer drawn, but they linger on, unwittingly or not, in conflict zones such as Syria, Somalia and Ukraine. In an era of mass-produced AK-47s and ICBMs, one such flashpoint was China in 1949 …

China. 1949: two vast armies prepare for a final showdown that will decide Asia’s future. One is led by Mao Tse-tung and his military strategists Zhou Enlai and Zhu De. Hardened by years of guerrilla warfare, armed and trained by the Soviets, and determined to emerge victorious, the People’s Liberation Army is poised to strike from its Manchurian stronghold. Opposing them are the teetering divisions of the Kuomintang, the KMT. For two decades Chiang Kai-shek’s regime had sought to fashion China into a modern state. But years spent battling warlords, and enduring Japan’s brutal conquest of their homeland, has left the KMT weak, corrupt, and divided.

Millions of Chinese perished during the crucible of the Sino-Japanese War and the long, gruelling years of the Second World War. But the Soviet victory against the Japanese Kwantung Army in 1945 allowed Mao’s Communists to re-arm and prepare for the coming civil war. Within a few short years, the KMT were on the defensive while the Communists possessed the most formidable army in East Asia. The stage was set for China’s rebirth as a communist dictatorship ruled by a megalomaniac who would become the biggest mass-murderer in history.

The book itself is a small one at 127 pages. It does however pack a large punch into a small frame. The history of the war between the two from 1945 to 1949 is gone through. The book also goes into the reluctance of the United States to back Chiang and the Kuomintang. This is somewhat surprising given the United States policy in Asia after this (The Korean and Vietnam Wars to stop the spread of Communism). For a short book it also goes through the Soviet Union's involvement with both the Kuomintang and Communists, along with other not well known history. For anyone who is looking to know the broad sweep of this moment in history, or is looking to start delving deeper into it, this book is a must. It is the perfect jumping off place for more reading.

The Timeline spans the period from 1911 when the Quing Dynasty was overthrown to Mao’s proclamation of the Peoples’’ Republic of China on 10 October 1949. A comprehensive Introduction provides an excellent overview of the major events and players in the 38-year period studied. In addition to continuous coverage with black and white photographs, there are coloured maps of 1934 Asia, Mao’s 1934/5 Long March and Communist offensives from Apr to Oct 49, as well as photographs of 21st century China and Tiawan. Newspaper reports of the time have been strategically embedded in the text.
This is an excellently readable coverage of the subject.