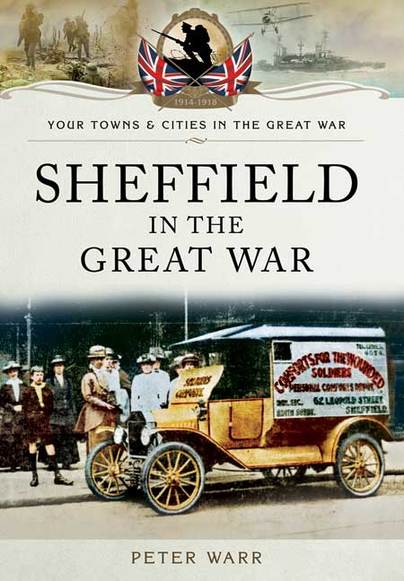 Sheffield in The Great War (Paperback)

Add to Basket
Add to Wishlist
You'll be £14.99 closer to your next £10.00 credit when you purchase Sheffield in The Great War. What's this?
+£4.50 UK Delivery or free UK delivery if order is over £35
(click here for international delivery rates)

This fascinating new book is devoted to an almost unknown period in the history of Sheffield. It sets the city's people and events against a background of key national developments by looking also at the way government regulations were tightened, how the country's morale was maintained, and how industry was encouraged to deliver more output.

Sheffield in the Great War is written for the general reader, and a large number of the city's residents, companies and streets are mentioned by name. Many aspects of life and work are described and illustrated with more than one hundred original photographs. Numerous advertisements and excerpts are presented from the city's wartime newspapers, and highlighted Display Boxes in every chapter summarize particularly interesting or quirky themes. For more specialist readers, Notes at the end of the book provide additional detail and links to other publications and websites; general readers can of course ignore those. Two substantial Indexes make it easy to find personally-relevant people, topics and places.

The book thus offers to the general reader an easy-to-read narrative with many pictures, and it provides a valuable source of information and reference to those who would like to learn more.

Sheffield in the Great War starts with a brief account of the conflict itself, looking at its enormous cost not only in terms of money but also in thousands and thousands of men and horses killed or disabled. Next it presents short reviews of Britain and the city in 1914 to introduce national features which became important in wartime Sheffield. The following chapters describe Sheffield life in the four and a half years of war, with special attention to recruiting and the creation of more than twenty new military hospitals. Huge numbers of people devoted themselves to voluntary work, and the book includes much information that has been lost for the past hundred years.

Part of the excellent 'Your Towns & Cities in the Great War' series, this volume covers the city of Sheffield, 'Armourer to the Empire', and the challenges it faced with the huge and ever growing demand for weapons, equipment and men (50,000). As the men went off to war the women stepped up and took over their jobs, working long hours in difficult and demanding conditions. The books tells too of more than thirty new hospitals, of the shell-shocked and wounded, a Zeppelin raid, riots and the harsh treatment of German residents.