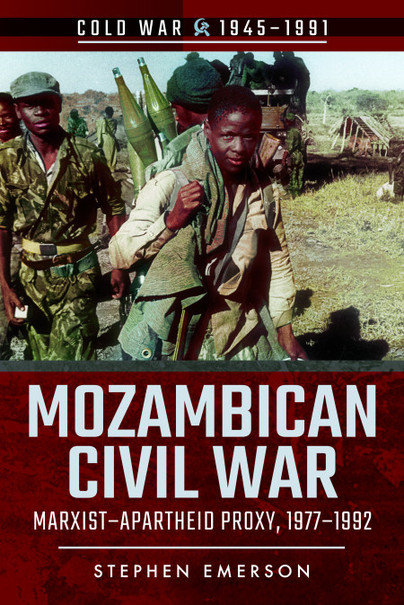 Click here for help on how to download our eBooks
Add to Basket
Add to Wishlist
You'll be £4.99 closer to your next £10.00 credit when you purchase Mozambican Civil War. What's this?
Need a currency converter? Check XE.com for live rates

As the Cold War raged on in the 1970s and 1980s, much of southern Africa, from Angola to Mozambique, became caught up in the superpower competition as local and regional proxies for both Moscow and Washington fought it out on the battlefield. Thus, the struggle to determine the future of a newly independent Mozambique was shaped by multiple factors beyond the control of its people in the course of its 16-year conflict from 1977–1992. These factors also contributed to the longevity and ferocity of the Mozambican war that would leave an estimated one million dead, millions more displaced and made homeless, and a country in ruins.

From the rise of the Resistência Nacional Moçambicana, or Renamo, in 1977 as a Rhodesian weapon against Zimbabwean nationalist guerrillas operating in Mozambique, through South African patronage in the 1980s and to Renamo’s evolution as a self-sufficient insurgency, the forces of Mozambican nationalism became inexorably intertwined with the geopolitics of the region and the international manifestations of the Cold War. Thus, both government and rebel forces found themselves repeatedly beholden to external interests – be it American, Soviet, Cuban, South African or Rhodesian – as each sought to advance its own agenda and future vision of the country. However, it would be Mozambicans themselves who spilled their blood in a clash of men and arms that spanned the length and breadth of the country. And ultimately this is their story of sacrifice and triumph.

Meticulously researched, incisive, using previously unexplored archival resources and scores of interviews with veteran Rhodesian and Zimbabwean officers, former Frelimo and Renamo soldiers, including interviewing RENAMO leader Afonso Dhlakama, Emerson provides fresh insights into the Mozambican civil war merging personal insights of protagonists with the broader strategic landscape. What emerges is an objective account of the civil war from the deep personal insights of the various protagonists—regional and national—whilst the civil war raged.

Emerson’s book is a veritable tour de force and should find its way in the curriculum of any course focusing on Africa issues of peace and security.

This is an important work on an underappreciated Cold War tragedy. Emerson uses readable prose and useful photos and maps to help the reader make sense of this complicated conflict. Perhaps most interestingly from my perspective, this slim volume manages to put the war in a regional context. The Mozambican civil war is meaningless absent an understanding of the horrible violence overtaking all of southern Africa at the time. This book is a real tour de force, one that will interest both experts and laymen alike.

The nicely presented text is well-supported by a wealth of illustration in the form of maps and photographs, lifting the lid on one of the lesser known proxy wars.

Emerson manages to keep the attention On a conflict that makes it clear how often certain wars can be useless and especially detrimental to both sides in battle. I did Not know much about the Mozambican Civil war but I must say that this book drew my attention to this subject, on the involvement of Rhodesia first and South Africa then and on the military and political situation in that corner of Africa.