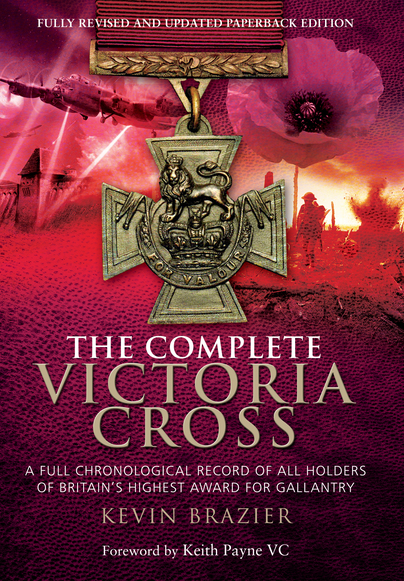 Click here for help on how to download our eBooks
Add to Basket
Add to Wishlist
You'll be £4.99 closer to your next £10.00 credit when you purchase The Complete Victoria Cross. What's this?
Need a currency converter? Check XE.com for live rates

This fully revised paperback edition of the complete chronological record of VC holders is an essential work of reference for every student of military history. All the British and Commonwealth servicemen who have been awarded the highest honour for exceptional acts of bravery and self-sacrifice are commemorated here. The first VCs awarded for the Crimean War and in the nineteenth-century colonial wars are described, as are the VCs awarded in the world wars of the twentieth century and the most recent VCs awarded during present-day conflicts in Iraq and Afghanistan. The extraordinary exploits recounted in this fascinating book make unforgettable reading.

This is a very useful addition to the ever-expanding library of VC literature. It is a full chronological record of all holders of the Cross complete with brief citations. burial locations and present locations of the VC. There is also an alphabetical list of the recipients. An excellent reference book.

The title says it all really. This is a full chronological record of all the VCs won from the first one awarded to Boatswains Mate Charles Lucas on 21 June 1854 while serving on HMS Hecla off Finland to LCpl Joss Leakey on 22 August 2013 in Afghanistan.

All in all, a simple yet very comprehensive record of all VC winners and one that will be used as a reference point by many.

4/5 for such a comprehensive book.

The Complete Victoria Cross is quite an achievement in research, bringing such an all-round perspective to very a distinctive theme, not merely detailing the first medals in 1854 to the most recent in 2013, but for also bringing the holder's names and stories once again to the forefront. It should be considered an asset to your military book shelf, whether you are a military enthusiast or an armchair historian.

From Boatswains Mate Charles Lucas in 1854 to LCpl Josh Leakey in 2013, this is a comprehensive record of all 1,363 recipients of the Victoria Cross. Listed chronologically by conflict, the entries include details of each individual's actions and, where relevant, the location of their medal and grave. Books on this topic are many but you can't go wrong with this one as a useful reference source for all things VC.

The Complete Victoria Cross records every recipient of the Victoria Cross in chronological order along with the reason to why they were awarded and gazetted for the medal. It also records when they died if they were not killed in action. For example the book mentions Captain Thomas Esmonde VC and that he won his award at Sebastopol between 18th- 20th June 1855 but also that his great-nephew Lieutenant Commander Eugine Esmonde was also a VC in his own right.

As well as recording who won the Victoria Cross and why, there is also a section in the book on where that medal now is. Such as Corporal Joseph Davies VC and Private Albert Hill VC who both earnt their award on the 20th July 1916 and that both their VC are now at the Royal Welch Fusiliers Museum, Caernarfon Castle, in North Wales, a place with special memories for me.

This book is an essential reference book for libraries and especially for those who enjoy military history. It is also a wonderful way to remember each and every recipient of the medal. We should never forget those who fought to protect us and were not afraid to pay the ultimate price.