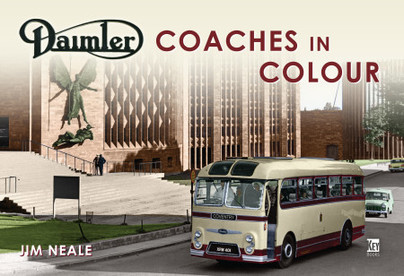 Preorder
Add to Wishlist
You'll be £14.39 closer to your next £10.00 credit when you purchase Daimler Coaches in Colour. What's this?
+£4.50 UK Delivery or free UK delivery if order is over £35
(click here for international delivery rates)

The Daimler Company was one of the oldest established builders of PSV chassis in the United Kingdom and enjoyed a reputation for quality and innovation, particularly with the fluid flywheel. From the earliest charabancs on solid tires, through the half-cab front-engined CVD6 and underfloor-engined Freelines to the rear-engined Roadliner, Daimler continued to prove their reputation was well earned. Ownership of the company changed several times over the years, until they were finally absorbed into the British Leyland empire, sealing their fate and eventual demise. With over 100 color images, this title provides insight into the history of Daimler throughout the years.

Jim Neale fell under the spell of buses as a schoolboy and drove for the Cambridgeshire independent until Eastern Counties took over in 1979. He has a wonderful collection of black and white and colour images, and has written several books, including My Favourite Bus, Daimler Coaches in Colour, and Burwell & District Motor Service - Illustrated History.