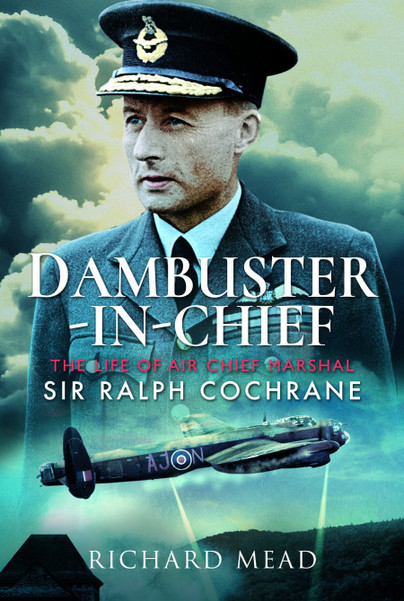 Add to Basket
Add to Wishlist
You'll be £25.00 closer to your next £10.00 credit when you purchase Dambuster-in-Chief. What's this?
+£4.50 UK Delivery or free UK delivery if order is over £35
(click here for international delivery rates)

Ralph Cochrane was born in 1895 into a distinguished naval family. After joining the Royal Navy, he volunteered in 1915 to serve with the RNAS in airships and was an early winner of the Air Force Cross. In 1918 he transferred to the fledgling RAF and learnt to fly, serving in Iraq as a flight commander under ‘Bomber’ Harris. His inter-war career saw him as a squadron commander in Aden before he became the first Chief of Air Staff of the Royal New Zealand Air Force. During the Second World War he served mainly in Bomber Command and commanded 5 Group from early 1943. He formed 617 Squadron and was instrumental in planning the legendary Dambuster Raid, the most spectacular of the War, as well as the sinking of the battleship Tirpitz. An inspirational leader, he trained 5 Group in low level target marking skills.

It was nice to read a book about one of WWII’s unsung heroes in Sir Ralph Cochrane, when you think that he must have had to play an important and strategic role in Bomber Command during the war.

"For the serious World War II reader, author Mead’s minor masterpiece not only adds Operation Chastise to one’s depth of the RAF’s most dangerous, controversial victories, but also a new name to rank alongside Great Britain’s most heroic warriors."

This is a fascinating biography of one of the most important figures in Bomber Command ruing the Second World War, and helps explain the part he played in turning the fortunes of the command around after the disasterously inaccurate results early in the war.

The Dambusters is one of my absolute favourite stories from WWII, and the film, with Richard Todd, remains one of my favourite films of all times. I had the original book, by Paul Brickhill, but I never tire of reading about the people who were involved, and this bio of Cochrane tells the story of an extraordinary man. Brilliant.