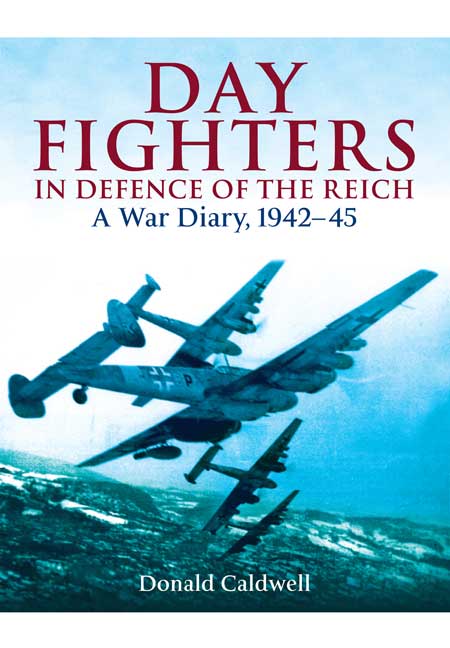 Day Fighters in Defence of the Reich (Hardback)

Add to Basket
Add to Wishlist
You'll be £35.00 closer to your next £10.00 credit when you purchase Day Fighters in Defence of the Reich. What's this?
+£4.50 UK Delivery or free UK delivery if order is over £35
(click here for international delivery rates)

Order within the next 6 hours, 43 minutes to get your order processed the next working day!

Day Fighters in Defence of the Reich is a detailed, comprehensive daily reference to the air operations flown by the Luftwaffe. These operations were designed to combat the daylight strategic missions by the United States Army Air Force targeting the German Reich and the western zone occupied by Germany.

This volume is a unique look at the German air defences as they struggled to cope with the threat posed by the American 8th and 15th Air Forces, which were charged with destroying Germany's critical war industries and wresting control of the air over the Reich from the Luftwaffe.

The previous volume in this series, The Luftwaffe over Germany: Defence of the Reich is an award-winning narrative history published by Greenhill Books. This book extends the story in an unprecedented fashion and includes:

• A brief narrative and a table of statistics detailing every mission of every Luftwaffe unit defending the Greater German Reich or the western occupied zone against strategic raids by the USAAF.

• A summary of every 8th and 15th US Army Air Force strategic mission over this area in which the Luftwaffe was encountered.

•Tables of monthly sorties, losses and victory claims by the USAAF and the Luftwaffe over the Reich and the western occupied zone. The growth of the American juggernaut can be followed in detail, as can the ever more futile struggle by the Reich Defence Force. The data allow validity of USAAF and Luftwaffe victory claims to be estimated.

• Quarterly orders of battle and casualties for the Reich Defence Force, broken down by aircraft type. The unsuccessful struggle of the Luftwaffe to keep its fighter units up to strength while introducing superior types and the relative vulnerability of its various fighters can be seen at a glance.

• Maps for 32 major missions showing the tracks of the bombers and every defending Luftwaffe unit, including their points of attack on the bombers.

• 189 photographs of Luftwaffe personalities and aircraft, many previously unpublished.

• 72 combat accounts by Luftwaffe pilots, most previously unpublished and all readily available in English for the first time.

This unique and authoritative book is based on documents in the German, American and British government archives and German pilot logbooks and interviews from the author's extensive collection. Caldwell is well known for his balanced presentations and the clarity of his writing. This book is a must-have for anyone with a serous interest in World War II aviation history.

This book completes the story begun by Caldwell and Dr. Richard Muller in The Luftwaffe over Germany: Defence of the Reich, which won the US Air Force Historical Foundation award for Best Air Power History Book of 2008. Critical praise for this book has been widespread.

Based on his sources, his track record, and the effort expanded o the project, the author's work is unlikely to be surpassed any time soon, if ever... Highly recommended, and quite likely to be remembered as one of the most important new books of the year (2012).

Donald Cladwell, tackles an immense, complex subject with his usual skill. Day Fighters in Defence of the Reich is an important resource for historians, but readers will also find it fascinating due to the deft way in which Caldwell incorporated personal accounts.

If this book were a painting, it might be termed “pointillist” because of the way in which tens of thousands of facts chronologically portray the battle between the Luftwaffe and Allied air arms. it Such a staggering quantity of information would be overwhelming in less capable hands. But Cadwell spices up his tight narrative with excellent photos and informative captions.

Day Fighters in Defence of the Reich is likely to be honoured by other historians.

Day-By-Day accounts of the Battle of Britain have been available for years, but here we have a presentation of the aerial defence of Hitler's Reich during the later years of the Second World War.

This is a tremendous piece of work.