The Secrets of History's Most Famous Embroidery Hidden in Plain Sight

Add to Basket
Add to Wishlist
You'll be £17.50 closer to your next £10.00 credit when you purchase Decoding the Bayeux Tapestry. What's this?
+£4.50 UK Delivery or free UK delivery if order is over £35
(click here for international delivery rates)

The story of the Norman Conquest and the Battle of Hastings as shown in the Bayeux Tapestry is arguably the most widely-known in the entire panoply of English history, and over the last 200 years there have been hundreds of books portraying the Tapestry and seeking to analyse its meanings. Yet, there is one aspect of the embroidery that has been virtually ignored or dismissed as unimportant by historians – the details in the margins.

Yet the fables shown in the margins are not just part of a decorative ribbon, neither are they discontinuous, but in fact follow-on in sequence. When this is understood, it becomes clear that they must relate in some way to the action shown on the body of the Tapestry. After careful examination, it has become clear that the purpose of these images is to amplify, elaborate or explain the main story.

In this ground-breaking study, Arthur Wright reveals for the first time the significance of the images in the margins. This has meant that it is possible to see the ‘whole’ story as never before, enabling a more complete picture of the Bayeux Tapestry to be constructed. This, in turn, has led to the author re-examining many of the scenes in the main body of the work, showing that a number of the basic assumptions, so often taught as facts, have been based on nothing more than reasoned conjecture.

Decoding the Bayeux Tapestry: The Secrets of History’s Most Famous Embroidery Hidden in Plain Sight by Arthur C. Wright is a wonderful, engaging study of this most famous of embroideries, retelling the Norman Invasion in stunning, colourful needlework. Arthur C. Wright studies every aspect of the Tapestry, from the beasts in the margins to the story being played out in dramatic detail in the main part of the Tapestry. The author demonstrates how the images in the tapestry, even the animals and mystical creatures in the margin, serve to tell the story of the tapestry and the Norman Conquest.

An entertaining read and thoughtful study of the most famous of tapestries Decoding the Bayeux Tapestry is an illuminating work, beautifully illustrated along the way with images from the famous needlework.

Fascinating really. You never consider who they got there, just that they showed up.

This tapestry style is most familiar to me by way of the art used in the film Bedknobs & Broomsticks, and (unbeknownst to me) depicts animals, creatures, pageantry of war, and changes between royalty and leadership while using illustrations and tapestry as a communicative written language. To interpret it, there's a use of newer-age maps to describe troop movement and offers explanations of history’s aftermath. Wright asks a lot of rhetorical questions to readers equal to the amount they ask of the tapestry, though they use an open, down to earth interpretation, almost like an open-ended monologue with a reader.

... an interesting and fresh look at a pivotal event in English history.

I’m still pleased to have had the opportunity to learn a little bit more about the Bayeux Tapestry, though, and to have been made aware that those medieval embroiderers were perhaps telling us more than meets the eye.

Invites you to think, research and learn.

If your interest is deeply focused on this subject, then this book will definitely be of interest.

I believe that this text is essential for those who want to discover something about a work on which they believe they know everything. I had read some books on the subject and living in southern Italy I find around me continuous traces of those fantastic men who were the Normans. But with regard to the tapestry, the misunderstanding has often been to consider the natives as an inferior race compared to the Norman supermen who subjugated them. This was not the case and even in this book Wright explains why. The Bayeux Tapestry and the Domesday Book are works that owe much to the organization and thought of the Anglo-Saxon people. This book is a must for anyone who wants to look at things from another perspective.

I love history books which are written in an engaging style and which open up new ideas about past events. That's exactly what I got in this new tome, Decoding The Bayeux Tapestry by Arthur C Wright... If only all history books could inspire me like this.

The book is produced to a high standard and the quality of reproduction is good...I did learn many things from this book and the variety of topics covered in addition to the Tapestry itself provided some context.

A well researched, entertaining and interesting book that can be read as a novel.
It's full of interesting explanations and gives you a clear idea of the Tapestry.
Recommended! 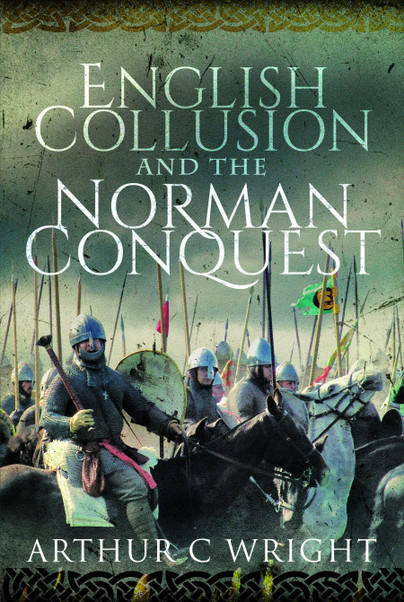 The reality of war, in any period, is its totality. Warfare affects everyone in a society. Here, for the first time, is a comprehensive analysis of eleventh century warfare as exposed in the record of the Norman Conquest of England. King William I experienced a lifetime of conflict on and off so many battlefields. In English Collusion and the Norman Conquest, Arthur Wright’s second book on the Norman Conquest, he argues that this monarch has received an undeserved reputation bestowed on him by clerics ignorant alike of warfare, politics, economics and of the secular world, men writing half a…