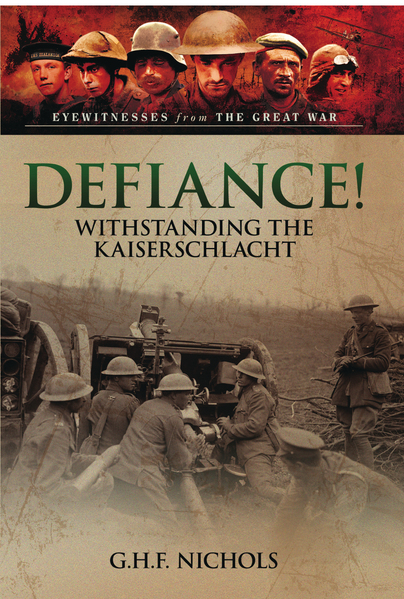 Click here for help on how to download our eBooks
Add to Basket
Add to Wishlist
You'll be £4.99 closer to your next £10.00 credit when you purchase Defiance!. What's this?
Need a currency converter? Check XE.com for live rates

George Nichols was an artillery officer serving with the 82nd Brigade, Royal Field Artillery. He was wounded in 1917, and returned to the guns in March 1918, just in time to experience the fury of the Kaiserschlacht, the great German offensive designed to knock the British army out of the war.

Nichols wrote a powerful account of the Kaiser's last great offensive battle from inside the eye of the storm, and it is one of the few primary source accounts which are told from the often overlooked perspective of the British artillerymen. Nichols, with wonderful British reserve, records how the men of the Royal Field Artillery steadfastly manned their guns. Nichols survived the onslaught and in 1919, was able to produce a full account of both the retreat and the British counter-attack which won back the lost ground.

First published in 1919, while censorship was still in force, this wonderful primary source has long been out of print and it's welcome return makes for essential reading for anyone with an interest in the Great War.

This book is a lively, personal account of the experience of 82 Brigade of the Royal Field Artillery from March to October 1918...

... the narrative is full of detail and gives not only an insight into events but how the headquarters of an artillery brigade worked. Nichols’ joined the brigade on 27 February 1918 and was appointed as Orderly Officer. With many personal and even trivial events included in the story, we are taken right into the heart of affairs. I found it a very absorbing and interesting read – especially when seeing the brigade’s war diary alongside.

Defiance! will be of particular value to anyone with connections to the brigade or an interest in the 18th (Eastern) Division under whose command it came, but I can also recommend it for those with a wider interest.

The Story of one Gunner Officer's war in the face of the Kaiserlacht offensive. The Germans knew this was their last gamble with troops released by the cessation of fighting in Russia. The tightening Allied blockade and the build up of American troops would see 1918 swinging inexorably against the Central Powers.

The bulk of most First World War memoirs are from the Infantry perspective. Nichols served with the 82nd Brigade RFA a Kitchener 2nd Army unit of 18th Eastern Division. He also wrote the Divisional history whereas little remains in print regarding the long lost 82nd Brigade.

The author returned from convalescence in Spring 1918 and this tells the story of the retreat from German advance and the stabilisation of the front and subsequently the Allied advance. The Army suddenly moved from static warfare to manoeuvre again, having to resurrect almost atrophied Gunner skills.

The latest installment in Pen & Sword's excellent "Eyewitnesses from the Great War" series is now available, with incredible insight into the great March 1918 German offensive from the perspective of a British artillery officer.

George Nichols fought with the Royal Field Artillery, suffering a serious wound in 1917. He returned to the front in early 1918, just in time to bear the brunt of the last big German push of the war.

There are many good points about "Defiance," but two special features make this tome particularly appealing. First is the date of the work. When Nichols penned this amazing account, the ink on the Armistice was barely dry. So fresh was his testimony that full censorship was still in effect. As a result, the book is filled with dashes where military censors deleted names and places.

However, the reader is never lost. Sufficient data is included to let the reader know exactly what is taking place and where, and how each passage fits into the overall scope of the text.

The book's second excellent feature is the photo section. Since the British were in full retreat during much of the German onslaught in the spring of 1918, the trench stalemate was broken in some areas and a war of movement resumed at long last.

This resulted in an unusual situation where desperate defenses were mounted behind railways, fences, temporary barricades and any other object that might stop a bullet. The photography section of "Defiance" captures the essence of this subtle change perfectly. The photos are previously unseen by this reviewer, clear and crisp in presentation, and a real treat for any student of World War I.

"Defiance" is offered in a convenient 6x9" format. The font is easily read, and the space-and-a-half format keeps pages turning quickly with the reader fully engaged. For a rare glimpse into the life of an artillery officer during the German spring offensive of 1918, you can't go wrong by adding this volume to your bookshelf.