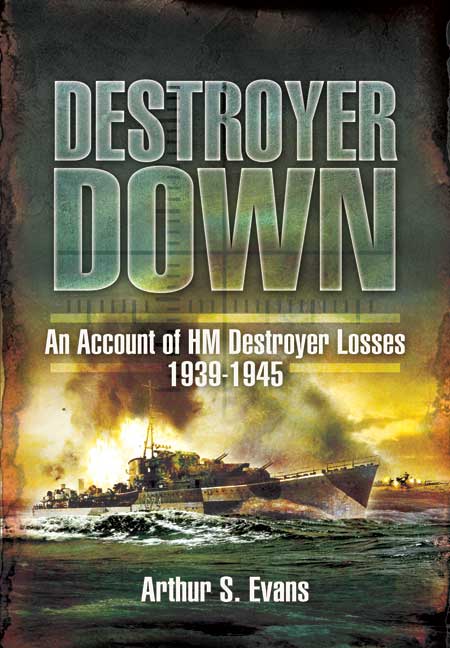 Click here for help on how to download our eBooks
Add to Basket
Add to Wishlist
You'll be £4.99 closer to your next £10.00 credit when you purchase Destroyer Down. What's this?
Need a currency converter? Check XE.com for live rates

His Majesty's destroyers had a long and costly war. Some eight thousand destroyer men did not survive. At the height of the war the Royal navy was commissioning four new vessels a month, which was only sufficient to replace those which had been sunk or severely damaged. This outstanding book contains the details of the majority of the sinkings that occurred throughout World War II and includes many first-hand accounts from the officers and crew involved.

Her Majesty's destroyers were in action from the first to the last day of World War II. Some 8,000 destroyer crew members were lost, and at the height of the war in 1942/3, four new ships a month barely replaced those lost or severely damaged. This book tells the stories of the majority of those sunk or irreparably damaged, and includes many first hand accounts from officers and ratings. In addition, there are several photographs which illustrate the damage sustained in action.
The author, who compiled a similar book on HM Submarines, took great care to set down the background in which the ship was involved, the sequence of events leading up to the loss, and the recollections of survivors. Their accounts bring to life the effects of the action, not just a stark account of bombs dropped or torpedo damage. The aftermath of surviving, seeing bulkheads and block gaping holes, are all recalled. It is a vivid memorial to brave and enduring men.

The author died in 1994, shortly after completing the manuscript, and the publishers have not felt it proper to edit it in any way. It does not need such treatment. What would be useful to future researchers, would be a companion volume setting out the particulars of each destroyer mentioned, as many would not appreciate the wide range of capabilities within this classification of warship, from the small Hunts to the large Tribals.

Destroyer Down – An Account of HM Destroyer Losses 1939-1945 is a most sobering, but nevertheless fascinating book of reference. Like the author’s celebrated record of wartime submarine losses, ‘Beneath the Waves’, the book details, chronologically, the appalling hardships and attrition rate that the Royal Navy’s Destroyer force endured during the Second World War. One hundred and fifty four RN, Canadian and Free French destroyers were sunk or rendered constructive total losses; nearly 300 others were severely damaged by mines, torpedoes, gunfire, or collision; over 8,000 officers and men of the Destroyer force were killed. At the height of the War, in 1942, the Royal Navy was commissioning 4 new ships every month, which was only sufficient to replace those that had been sunk or severely damaged. For those of us who have not experienced ‘total war’, it is hard to comprehend the scale of loss and sacrifice, especially when one tries to reconcile it against the size and shape of the contemporary RN force structure.
Drawing on eye witness accounts and British and German Naval historical records, Evans authoritatively details how each ship was lost – starting with HMS Blanche, mined whilst escorting the Cruiser Minelayer Adventure off the Thames estuary on 13 November 1939, through to the Free French Destroyer La Combattante, which was also, probably, mined off the Humber, overnight 23 / 24 February 1945. Destroyer Down graphically, yet dispassionately describes feats of individual and collective bravery – most notably during the Norwegian, Malta and Cretan campaigns of 1940 and 1941 respectively. One cannot help but be moved by the accounts of Captain Warburton-Lee’s Command of the 2nd Destroyer Flotilla (Hardy, Havock, Hostile, Hotspur and Hunter) and their heroic action at the first Battle of Narvik, or Lt Cdr Roope’s relentless, selection and maintenance of the aim in Glowworm, as he fearlessly engaged the German heavy-cruiser Hipper and her escorts against overwhelming odds, in atrociously heavy weather, having already lost members of his ship’s company over the side. His deserved award of the Victoria Cross is afforded an almost perfunctory acknowledgment by Evans; the account of heroic sacrifice is but one of many.
Although a significant number of Destroyers were lost to direct enemy action, notably by air attack or by torpedo whilst on convoy escort operations in the Mediterranean, I was struck by just how many escorts were sunk or crippled by the unseen, anonymous menace of mines, especially in home waters during the early years of the War. Notwithstanding this, the saddest and perhaps most pitiful instances of loss, were those Destroyers that were rammed and sunk by the ship they were escorting at night, whilst operating unlit, in close formation: Duchess struck by Barham west of Islay, with the loss of 129 officers and men; Fraser hit by Calcutta off the Gironde: Imogen sunk by Glasgow east of Duncansby Head; Margaree, which was struck by the merchantman Port Fairy west of Ireland with the loss 142 of her ship’s company of 176, many of whom had recently been through drafted from Fraser, and; Punjabi sunk in the Arctic Sea, when she cut across the bows of King George V. The most ignominious tale is that Thracian, which was captured, virtually intact, by the Japanese at Hong Kong after grounding during a night action off Kowloon; the ship’s company continued to fight bravely onshore, but the ship was subsequently salvaged and commissioned by the Imperial Japanese Navy, finishing the war in Yokosuka as Patrol Boat 101.
From Acasta to Zulu, from November 1939 to February 1945, Destroyer Down is likely to become an indispensable reference book for those who would wish to research and understand in detail the loss of individual ships. It is not an authoritative narrative of the war at sea during the Second World War, nor is it particularly well illustrated, but it does chronicle in a very human context and readable format, the stories of the often forgotten actions of His Majesty’s Destroyers.

Destroyer Down is an indispensable reference source for naval historians of the second global conflict... It is the A-Z of destroyer losses.

Arthur Evans wrote Beneath the Waves, published by William Kimber in 1986.