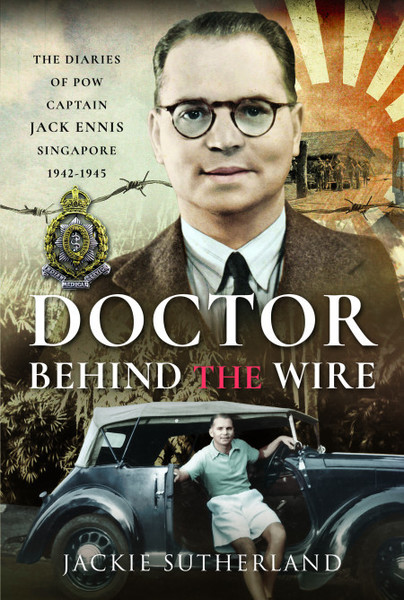 Doctor Behind the Wire (ePub)

Click here for help on how to download our eBooks
Add to Basket
Add to Wishlist
You'll be £9.98 closer to your next £10.00 credit when you purchase Doctor Behind the Wire. What's this?
Need a currency converter? Check XE.com for live rates


4 stars - This follows the Diaries of POW, Captain Jack Ennis, Singapore, 1942–1945 and goes in depth into his diary entries- so interesting and intriguing! highly recommend

One can only imagine the horrors endured by Prisoners of War in Singapore during WWII - Jackie Sutherland doesn't hold back in this truly remarkable and powerful tale of Jack and Elizabeth Ennis...

I highly recommend this book. A book to read again and again, every time bringing forth something new.

"An amazing story of courage, love and life-long friendship."

Collated by his eldest daughter, this is the transcribed diaries of Jack Ennis who was a doctor working for the Indian Medical Service (IMS) - a military medical service in British India - who was stationed in Singapore when the Japanese invaded in 1942. Jack had married Elizabeth Petrie just four days before both became prisoners of war - Elizabeth was at the notorious Changi gaol, whist Jack was at a number of bases nearby.

A great read, thank you for sharing your Dad's diaries. It's a fascinating insight into life in the prison camp during the war. Well worth purchasing.