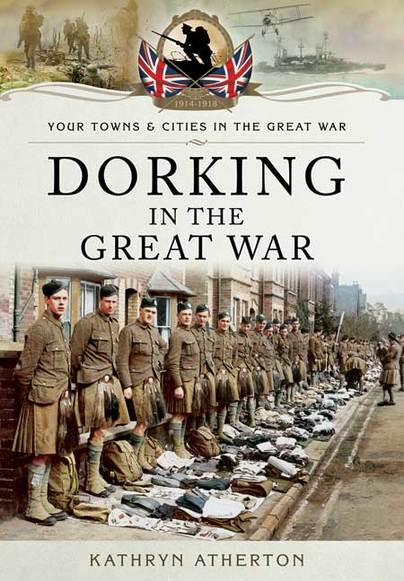 Dorking in the Great War (ePub)

Click here for help on how to download our eBooks
Add to Basket
Add to Wishlist
You'll be £4.99 closer to your next £10.00 credit when you purchase Dorking in the Great War. What's this?
Need a currency converter? Check XE.com for live rates

From Zeppelin raids to housing refugees and evacuees or from men volunteering to fight or women working in the local Gunpowder factory, Dorking in the Great War looks at how the experience of war impacted on the town, from the initial enthusiasm for sorting out the German Kaiser in time for Christmas 1914, to the gradual realization of the enormity of human sacrifice the families of Dorking were committed to as the war stretched out over the next four years.

The Dorking volume has been a labour of love for Kathy Atherton who is well-known and key figure at the local museum where she has a responsibility for exhibitions. In addition Kathy is a battlefield guide in Ypres and on the Somme and there interests combine with her knowledge of local families and their history. It is very obvious that she knows her subject well...

... This is a fascinating an extremely revealing work written by someone with substantial mastery of her subject. Although these books are likely to be read by local people they hold a huge resource of knowledge for social historians or for the general reader interested in the Home Front during the war. There is a significant detail of local families caught up in the crisis and many pages of interesting and relevant photographs. This is an excellent book that will be sold locally for many years to come.

A fascinating insight into Dorking during the war.

This is in the Pen and Sword series 'Your Towns and Cities in the Great War' which is shaping up to be a useful and interesting series for the WW1 Centenary... In the book there is some great material, backed up with excellent illustrations.

Combines fasinating personal stories with an overall social history of the town and its experience of war. It tells the hardship and sacrifice that faced the people of Dorking from the outbreak of war in 1914, when the town band played troops off from the station, to the peace celebrations in July 1919.

A book detailing many touching personal details that emerged about Mole Valley families during the period.