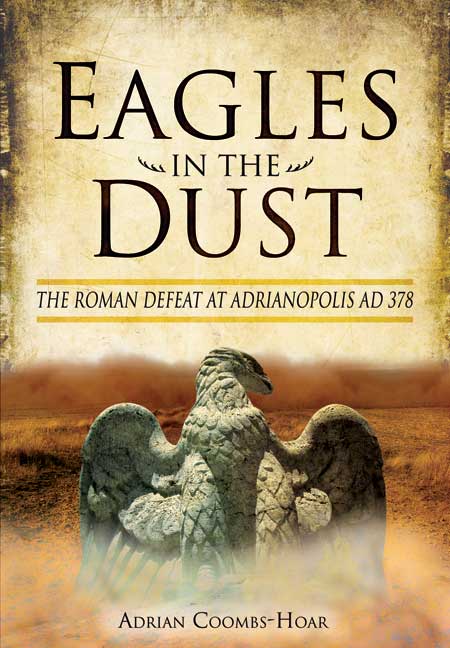 Eagles in the Dust (Hardback)

The Roman Defeat at Adrianopolis AD 378

Add to Basket
Add to Wishlist
You'll be £19.99 closer to your next £10.00 credit when you purchase Eagles in the Dust. What's this?
+£4.50 UK Delivery or free UK delivery if order is over £40
(click here for international delivery rates)

In AD 376 large groups of Goths, seeking refuge from the Huns, sought admittance to the Eastern Roman Empire. Emperor Valens took the strategic decision to grant them entry, hoping to utilize them as a source of manpower for his campaigns against Persia. The Goths had been providing good warriors to Roman armies for decades. However, mistreatment of the refugees by Roman officials led them to take up arms against their hosts.

The resultant battle near Adrianopolis in AD378, in which Valens lost his life, is regarded as one of the most significant defeats ever suffered by Roman arms. The Roman historian Ammianus Marcellinus called it the worst massacre since Cannae, nearly six hundred years previously. Modern historians have accorded it great significance both at a tactical level, due to the success of Gothic cavalry over the vaunted Roman infantry, and in strategic terms, often citing it as the beginning of the end for the Empire. Adrian Coombs-Hoar untangles the debate that still surrounds many aspects such claims with an insightful account that draws on the latest research.

A very pleasant and useful book to read, and one that anyone interested in the Late Roman Empire should find enjoyable.