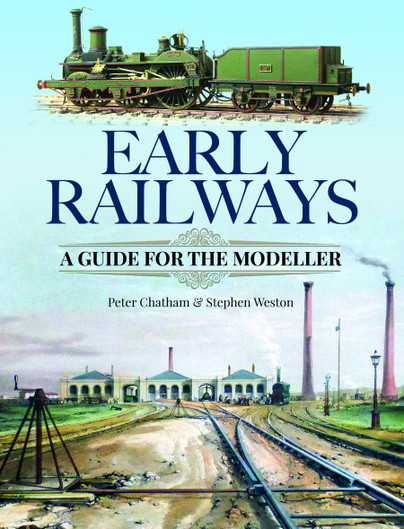 A Guide for the Modeller

Click here for help on how to download our eBooks
Add to Basket
Add to Wishlist
You'll be £7.49 closer to your next £10.00 credit when you purchase Early Railways. What's this?
Need a currency converter? Check XE.com for live rates

Early Railways, A Guide for the Modeller will encourage and support the modelling of the earliest period of railway history, from the very beginnings of steam traction at the start of the nineteenth century, up to about 1880; a period which for British modellers has scarcely been covered in book form. Over these few decades the railways evolved from something which at the start was markedly different, into a scene that any present-day railwayman would recognise.

It is a time with much to commend it from a modellers point of view. The trains were much shorter and therefore easier to fit into the limited space most of us have available as, correspondingly, were the station layouts, especially at the beginning of the period. Modelled at 7mm to the foot scale a modern steam express would need at least 12 or 13 feet in length and a minimum curve radius of 6 feet, whereas an 1840 express of a loco and a dozen carriages might be no more than about 6 feet long and, behind the scenes at least, able to take curves of no more than 2 or 3 feet radius, as well as being able to instantly catch the eye of the viewer.

The book is a delight to leaf through and anyone with an interest in early railways will want a copy, no matter what their modelling scale.

This book is well illustrated, both with reproductions of contemporary artworks, dimensioned/scale drawings and photographs of models.

Sources of models and further reading round off this interesting window into a rarely travelled path of railway modelling, a period which certainly deserves wider attention.

This is a fascinating book, dealing with a subject which is not all common in modelling...

... For those contemplating making models depicting scenes from the last-but-one century, this is definitely for you.

"Although I have not modelled railways for a number years this book could get me building then again. The book provides a wealth of information for anyone interested in this era of railways."

An excellent introduction to anyone wishing to model the earlier period.

This book provides a wealth of information for anyone interested in this era of railways.

The book concludes with a list of sources of both complete kits and individual parts, a bibliography, and a somewhat vestigial index. All in all it’s a splendid book, highly recommended for those wishing to build models of the period, or anyone interested in the early history of railways

This is a most attractive publication, well produced on quality paper with plenty of eye catching illustrations. It covers railway development in the early part of the Nineteenth Century for the model maker and in doing so covers new ground.

The book is supplemented with a look at layouts and models inspired by this period, starting with the prolific work of Mike Sharman who was a pioneer in this field fifty years ago. A model of York, Newcastle & Berwick Railway 2-2 2 Plews is featured. The chapter devoted to recent work by present day modellers shows how standards have been raised with some outstanding work by those now attracted to this early theme. Quite inspirational.

5.0 out of 5 stars. Very good book on an interesting subject.


This is an excellent publication, covering many aspects of the early railways with much for the interested modeller to learn from. As the period covered was one of experimentation, many features that were later passed over are nicely covered, with excellent drawings, not only of locomotives and rolling stock, but also of the track-work (e.g. stub points).
For anyone interested in modelling this fascinating period, this book is a must purchase item.

The historical detail in this book is fascinating and the detailed diagrams of the early engines and rolling stock will be very useful to a modeller of this era. The book is aimed at the '0' gauge modeller. I would suggest that this book is more aimed at the experienced modeller and, if you're a master scratch builder, it would be a must have reference.

On the whole a really great historical reference book of long forgotten trains with stunning examples of dioramas from top modellers.

A work of joy.

It is comprehensive, very informative and very well written. It is likely to appeal both to railway modellers who have a specific interest in its subject, and to those of a similar ilk who are just interested in ‘early’ railways, but with no inclination towards actually modelling the era. Transport Historians with an interest in early British, Continental and American railways may also find it of interest, while Social Historians seeking depictions and descriptions of early Nineteenth Century Britain may also find it worthy of their perusal.

Profusely illustrated throughout, "Early Railways: A Guide for the Modeller" is a unique and extraordinary contribution to railroad modeling information and instructional reference collections, making it an ideal and unreservedly recommended addition to personal, professional, and community library collections.

Really interesting and informative, just the job if you are a bit bored up with Sprinters, Class 66s, Panniers, the latest Hornby Terrier (is it as good as the Rails one, yawn) etc etc. Here is a whole different world of railways you might model, illustrated with good source material including drawings and some lovely examples of early model railways that folk have built, including the fascinating work of Mike Sharman. There is s ome coverage given to North American prototypes and the authors are well known as proprietors of "Parliamentary Trains" who manufacture model kits for the earlier eras of railways.

This book covers railways 1830 to 1880, and is aimed at modellers, although this reviewer, who has no particular interest in railway modelling, found great interest and pleasure in its pages.

The book is a quality, 120 pages hardback, which is nice to handle. It is profusely illustrated with photographs, drawings, plans, and paintings of full size and model railway infrastructure, locomotives, carriages, wagons and layouts, and a list of sources of supply for modellers... A most handsome book, which I will add to my library with pleasure.

A very handsome A4 hardback, of approx 120 pages, filled with great pictures in both colour and black and white. Authors Peter Chatham and Stephen Weston, themselves manufacturers of high end trains etc, have produced a book to inspire and inform railway modellers with the earlier period, pre-1880, of steam. One minor gripe is that the book assumes a knowledge of the subject I don't as yet have, and there's no glossary, so it's a bit opaque in places for an interested layman like me.

After a decent introduction to the subject, there's a chapter on a pioneer of modelling this period, Mike Sharman, followed by chapters whose titles - Infrastructure, Locomotives, Carriages, Wagons, Layouts and Models - tell you what to expect. There's an appendix listing sources of model suppliers, and a bibliography. The chief attraction, however, are the copious and very attractive illustrations, which range from a decent number of crisply* reproduced linear diagrammatic plans, to old prints and photos, and colour images of models and layouts.

I'm primarily a wargame figure collector and miniature model builder focussed on WWII stuff in 1/72. But I do have an interest in model railways, and this is a beautiful, fascinating and inspiring book on an area of train modelling not often covered. Definitely worth having a look if you're interested.

This is a great book for the scratch built modeller. What is great about this book is that it covers in detailed areas the Broad Gauge of I K Brunel which is sadly missing in mainline publications

After working as a metallurgist, Peter Chatham went into model railways, manufacturing a range of kits, parts and transfers. He was production manager for the London & North Western Railway Society's Journal and contributed many articles. He is now researcher and kit designer for Parliamentary Trains' Ltd.

After working as a geologist, Stephen Weston went on to develop his own company, which specialises in the stabilisation of old shallow mine workings and mineshafts. He joined the London & North Western Railway Society and for three years was the Journal Editor. His interest in the London & Birmingham Railway and 0 Gauge modelling resulted in the formation of Parliamentary Trains Ltd., where Stephen is responsible for kit production and marketing.