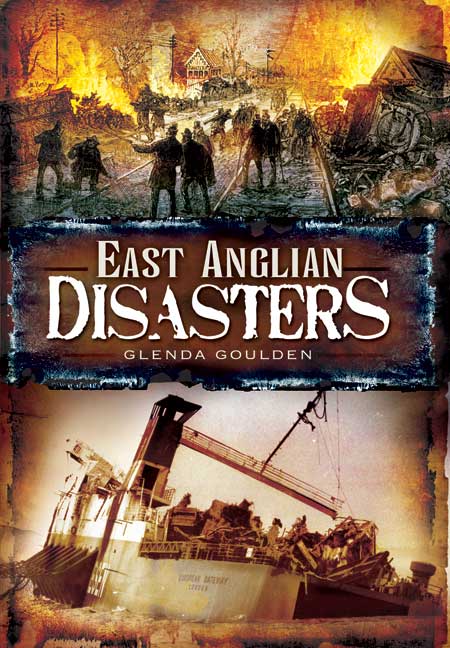 Click here for help on how to download our eBooks
Add to Basket
Add to Wishlist
You'll be £4.99 closer to your next £10.00 credit when you purchase East Anglian Disasters. What's this?
Need a currency converter? Check XE.com for live rates

Disasters are part of our national history and some were so terrible in their consequences, like the Black Death, the Great Fire of London and the Blitz, that they have come to define an era. In regional history, too, they have had an extraordinary effect, and this is the theme of Glenda Goulden’s gripping book. From the long history of East Anglia she has selected those disasters that have had the deepest impact and reconstructed them in telling detail. The episodes she recounts were remarkable when they occurred, and they have a grim fascination for us today. She chronicles fires and explosions, the collapse of buildings and bridges, lethal accidents at sea and on the roads and railways, and tragedies resulting from enemy action and acts of God.

This is unlike anything else in our local section at the moment and it deserves a wide audience.

A former town councillor has researched some of the region;s most dramatic incidents for her latest book, East Anglian Disasters..

Glenda has made a detailed study of each incident dating from medieval times through to the 1980s.

This disaster filled book contains gripping true stories of past disasters that some may know and others nay not from floods, to raids, to explosions. The details in the book are all vivid which allows the reader all the details of the numerous disasters recorded in this information filled book. The disasters that are recorded in this book are very interesting because a lot of the details in the book are not widely known so you can learn a lot about the events which have taken place by reading this book. The variance between man made disasters and natural disasters that people know to be 'caused by God' makes the book have an interesting variety and stops the book from becoming tedious with similar disasters that have happened in the past. By including pictures in the book it gives the reader a better mental image of the disasters whilst they are reading about them and therefore allows the gravity of the disasters sink into the mind of the readers. Also, by using figures throughout the different stories it adds a scale to the disaster by mentioning the number of deaths, people effected and the troubles it caused, such as houses burnt down. I like this story because it gives a lot of vivid and useful information about disasters that may not have a lot of information known about them before this intriguing book.