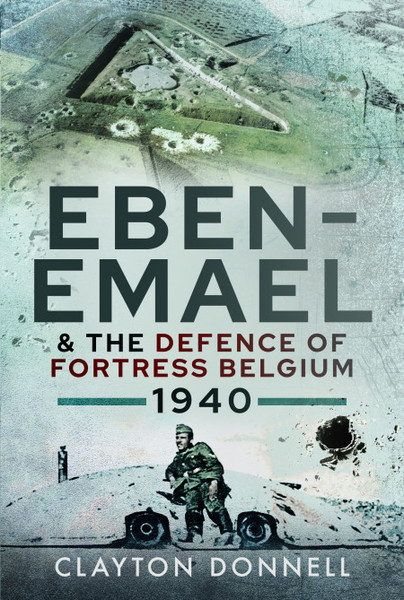 Eben-Emael and the Defence of Fortress Belgium, 1940 (Hardback)

Add to Basket
Add to Wishlist
You'll be £17.50 closer to your next £10.00 credit when you purchase Eben-Emael and the Defence of Fortress Belgium, 1940. What's this?
+£4.50 UK Delivery or free UK delivery if order is over £35
(click here for international delivery rates)

In the early morning of 10 May 1940, the sky literally fell on the heads of the defenders of Fort Eben-Emael, considered to be Belgium's most powerful fortress. This huge structure, with its powerful artillery and infantry weapons, was the key to the Meuse and Albert Canal defences. In the darkness of the pre-dawn, German DFS 230 gliders drifted silently over the southern Netherlands, landing one by one on top of Eben-Emael. Within minutes German Special Forces troops destroyed most of the fort’s weapons and observation capabilities. The following day, the garrison surrendered, and the door to Belgium and France was open.

But, as Clayton Donnell relates in this perceptive and meticulously researched study, Eben-Emael was only one of the nineteen forts of the fortified positions of Liège and Namur attacked in May 1940. Three new and sixteen refurbished forts held out for several days, and fought to the death. The story he tells contradicts the common assumption that these static defences were rolled over or bypassed –powerless to resist the overwhelming force of the German combat engineer’s assaults, Stuka bombs and heavy artillery shells. In vivid detail he demonstrates that their importance in the 1940 campaign has been seriously under reported, and he gives clarity to some of the legends that have grown up around the capture of Eben-Emael itself.

" An invaluable, original, and unique contribution to the growing body of World War II histories..."

An invaluable, original, and unique contribution to the growing body of World War II histories, "Eben-Emael and the Defence of Fortress Belgium, 1940" is an extraordinarily informative and impressively presented study.

An astonishing account of how France and Belgium fell to the invading German forces in 1940.

This is a very good and comprehensive book with lots of fascinating detail and information, so credit must go to the author Clayton Donnell for such a good book that kept me reading and my attention for a couple of evenings.

A well told, detailed story of dogged determination and immense courage of elements of the Belgian army. This is a must read for anyone wanting to understand the beginning of World War Two. The forts of Liege and Namur significantly contributed by their damaging effect on the Blitzkrieg. The last of the forts to surrender fell while the evacuation of the British from Dunkirk was in progress such was their tenacity.
The maps and illustrations are all of the same high standard as the text. The full glossary, list of abbreviations and equivalent ranks further aid the readers understanding. The main title is less than the book deserves as this book is about the full works of fortress Belgium.
We highly recommend Clayton Donnell’s work to you.

In addition to the details of the taking of Eben-Emael, it is a part of the story of the 1940 invasion of Belgium which I had been really unaware of, and that is despite many years of interest in the history of WW2. A really interesting read, and so much more to it that adds to the whole picture of the 1940 Blitzkrieg. One I certainly recommend.