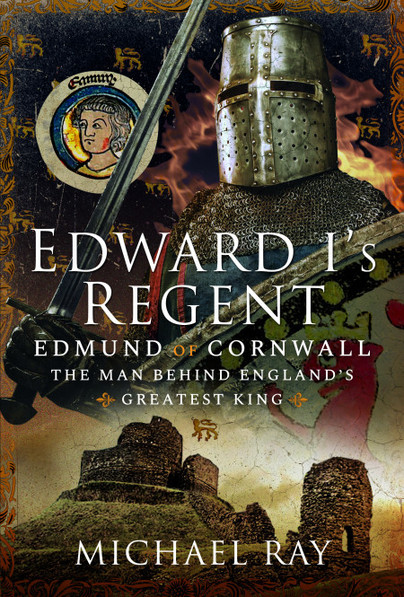 Edmund of Cornwall, The Man Behind England’s Greatest King

Add to Basket
Add to Wishlist
You'll be £25.00 closer to your next £10.00 credit when you purchase Edward I's Regent. What's this?
+£4.50 UK Delivery or free UK delivery if order is over £40
(click here for international delivery rates)

Born at Christmas 1249 to Richard, Edmund of Cornwall was nephew to Henry III and cousin to Edward I. His eventful childhood took him to Germany when his father was elected king there. He was captured at the Battle of Lewes and imprisoned for more than a year. Returning from crusade, he witnessed the brutal murder of his half-brother, which left him as heir to his father, the richest man in the kingdom.

Throughout his life, Edmund played a crucial role in medieval England. As Regent of England, Earl of Cornwall and the richest man in the land, he was a leading force of the late-thirteenth century.

This book considers Edmund’s life, his use of his wealth to lend to the king and others and to be a major benefactor of religious houses. His piety saw him found two new religious houses, rebuild another and bring the Holy Blood relic from Germany to Hailes abbey. His record as Regent of England for three years is assessed. The wide spread of his lands, which included 13castles and more than 800 places in 27 counties, and his tenants are set out as is his place in the local community. The basis of his wealth and its sources, including money from his lands but also from tin mining and marine dues in Cornwall, is explored and his knightly affinity and his close associates and officials are considered. On a personal level, the book examines his unsuccessful, childless marriage with the sister of the Earl of Gloucester.

Edmund was a key figure throughout Edward I's rein and the late-thirteenth century. In this insightful account, the man behind England's 'greatest king' is at long last brought to the fore.

"I would recommend this book to historians studying the Plantagenet period. Little is written about Edmund, so this book adds greatly to the knowledge of the period and the people around Edward l."

After school in Shropshire, Michael Ray read geography and town planning at King’s and University Colleges, London. Retiring early from a planning career, he returned to KCL and obtained a PhD after a study of aliens in thirteenth-century England. He has since been published in books, journals and on websites including Academia.

The late 13th century witnessed the conquest of Wales after two hundred years of conflict between Welsh princes and the English crown. In 1282 Llywelyn ap Gruffudd, the only native Prince of Wales to be formally acknowledged by a King of England, was slain by English forces. His brother Dafydd continued the fight, but was eventually captured and executed. Further revolts followed under Rhys ap Maredudd, a former crown ally, and Madog ap Llywelyn, a kinsman of the defeated lords of Gwynedd. The Welsh wars were a massive undertaking for the crown, and required the mobilisation of all resources.…