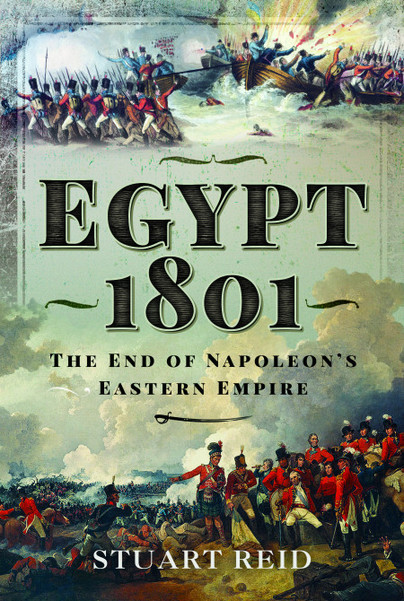 
"The book should form a useful addition to the library of anyone with an interest in this campaign."

It’s always nice when you finish a book and say, “wow, I didn’t know that!” Such is the case with Stuart Reid’s Egypt 1801: The End of Napoleon’s Eastern Empire (Frontline books 2021.) If you are like me, I had always wondered why Napoleon bothered going to Egypt in the first place, and assumed that he fled Egypt after the French Flagship L’Orient blew up in Aboukir Bay.

Napoleon went to Egypt for the same reason the Italians invaded Egypt in 1940 – to grab the gateway to India and the Far East. If you are familiar with the whole Napoleon era, the key to coalition warfare against the French was Great Britain footing most of the bills. Much of their wealth at the time came from India and beyond. Cutting off the money source for the British would have had a big impact on the wars against the French. And with restless Indian nobles looking for a way to overthrow British rule, taking Egypt could have turned into the gateway to more French wealth. So, Napoleon had a good idea. Who knew! (Well, I should have as a student of the WWII Mediterranean Theater.)

And Napoleon didn’t leave because the French fleet was demolished – he left because he had accomplished what he had set out to do – namely conquer Egypt and a lot of the Middle East. Job done - go home. End of myth.

Reid’s book really takes us to the story AFTER Napoleon left, telling how the British Army responded to the loss of Egypt and the campaign to regain the country (and gateway.) It‘s the story of Sir Ralph Abercromby, a solid but functionally blind leader, and his understrength army (half the size of the French force left in the country) and their battles to regain Egypt. He was aided by 1) Napoleon wasn’t there and 2) the competent French general left behind had been assassinated, leaving a non-so-competent general leading the enemy. Reid tells much of the story through the memoirs of officers involved, so you get a good feel for the terrain, plans, and what went right and wrong – like leaving troops in plain sight (and range) of enemy guns while leaders “counselled” on what to do next. It’s a story I hadn’t heard before/

There are a couple caveats: maps are sparce, so following both the French route of conquest and Abercromby’s is difficult to follow. In addition, he occasionally drops references those British readers might pick up on, such as the obtuse Marbles reference, but others may not, adding to some confusion and stopping the narrative. But other than that, Reid has crafted an interesting, little-known story which will appeal to any student of the era. With excellent and detailed OoBs, excellent end notes and a bibliography for further study, this one is a gem.

This is an interesting book, covering a relatively unfamiliar campaign in detail. This was one of the few clear-cut British successes during the Revolutionary Wars (other than some conquests of French colonies), and thus a key step in the slow improvement of the British army. There is plenty of detail on the nature of the British army in Egypt, how it was structured, the drill it used and what made Abercromby such a key figure. There is also plenty of material on the French side, as well as on the crucial role of the Ottomans, who won one of the key victories of the campaign, thus undermining the French position in Cairo.

"Reid’s storytelling is excellent, and he takes opportunities throughout this book to explain the composition and structure of the regiments."

"This is a thoroughly recommended, excellent and detailed account of a history-making campaign that is so often overlooked."

This is a very useful counterbalance to the Waterloo centric offerings for the period. It explains Napoleon’s strategy and indeed his initial success in breaking the route to India and thereby potentially crippling the British economy. Having achieved the capture of Egypt and returned to France to deal with other pressing matters, the story switches to how Abercromby with his limited operational support, succeeded in taking back Egypt. It is a point of conjecture just how different things might have been had Napoleon succeeded strategically and had Britain been less able to bankroll the many coalitions.