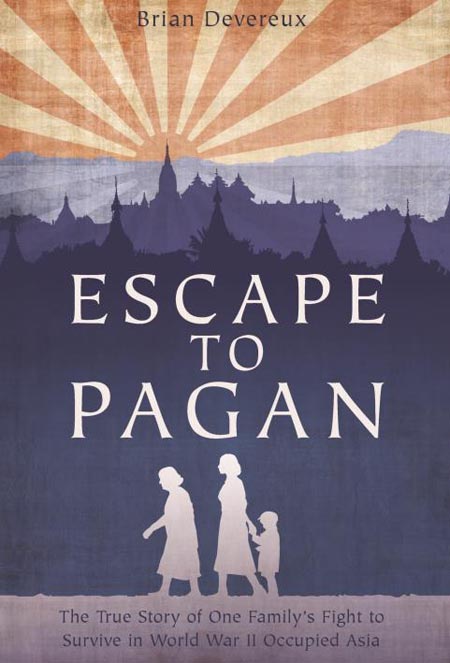 Add to Basket
Add to Wishlist
You'll be £19.99 closer to your next £10.00 credit when you purchase Escape to Pagan. What's this?
+£4.50 UK Delivery or free UK delivery if order is over £35
(click here for international delivery rates)

A gripping true story of survival set in Hong Kong and Burma, as one family struggles against overwhelming odds in World War Two. Divided by war, in order to see each other again they must overcome terrible danger. The beautiful landscape of Burma and the tragedy of war are evocatively portrayed in this haunting and moving book.

Hong Kong. Leading an attack on Golden Hill, Jack Devereux of the Royal Scots is shot through the head. A Japanese officer attempts to behead him, in order to blood his samurai sword; waking momentarily, he kills his would-be executioner. His head swarming with maggots, he survives capture as the Japanese are both impressed and fascinated by his wounds. Alive, albeit in a dangerously precarious physical state he then goes on to experience and escape the horrific and tragic incident of the sinking of the Lisbon Maru, in which hundreds of POWs drown, the sharks of the South China Sea, the mines of Nagasaki and the atom bomb.

Burma. Jack’s wife Kate Devereux, her infant son (the author) and mother Harriet desperately try to avoid the unstoppable advance of the Japanese; they flee their home, taking only what they can carry and walk the jungles foraging for food while avoiding predators, snakes and armed bandits (dacoits). Terrified Kate’s marriage certificate will be discovered by the Japanese, they adopt the guise of the Mons Burmese tribe. The once prosperous family becomes destitute and starving. Their chance of survival was slim; multitudes of people like the Devereux’s fleeing the Japanese died of exposure and starvation, were shot by dacoits or killed in bombing raids. They are kept alive by the author’s incredible grandmother, a strong-willed resourceful woman with a proud bearing, able to speak fluent Japanese but also to pass herself off as native Burmese. Their destination is the deserted and mystic city of Pagan. The beautiful but deadly landscape of Burma is the setting for their adventure-filled story.

Brian Devereux was born in Burma in 1940 and the early part of his life is described in this book. He worked freelance for twenty five years in the film industry, and as a stuntman; once doubling for Michael Caine, performing all the stunts including the ‘deadfall’ in the film of the same name. He also owned a country house hotel.