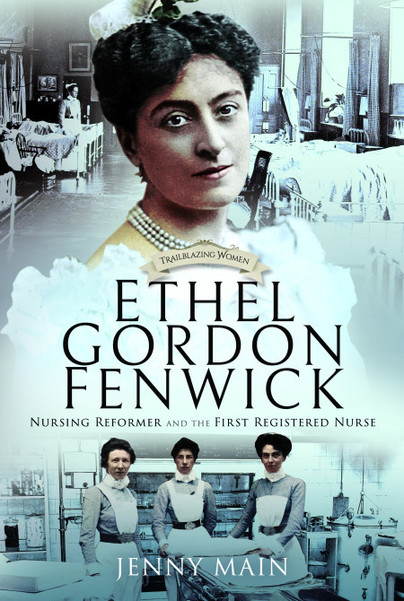 Click here for help on how to download our eBooks
Add to Basket
Add to Wishlist
You'll be £9.98 closer to your next £10.00 credit when you purchase Ethel Gordon Fenwick. What's this?
Need a currency converter? Check XE.com for live rates

The book is well-written, includes black-and-white illustrations, and tells the remarkable life story of this nursing pioneer and reformer whose name deserves to be better known amongst healthcare professionals.

This book is not what I expected, it was more, much more. This book was about Ethel Gordon Fenwick 1857-1947 in England and her fight to take nursing as a vocation to a profession. She started her calling early. At 24 she became the youngest matron (head nurse) at St. Bartholomew's Hospital in London. She fought to bring training, professionalism and standardization to nursing.. Ethel went head to head with Florence Nightingale and Eva Luckes each having their own idea on what nursing should be.
This time period was meticulously documented in an interesting read. Jenny Main surrounds the fight with what was happening in the world such as woman's suffrage, electricity, cars and airplanes..She writes almost in parallel: what is happening with nursing alongside world events and inventions. Reads like a nonfiction book due to all the historical facts embedded in the book.

If you have any interest in medical history, nursing, social history or women's rights, this is the one book you have to read.
Excellently researched it covers not only what she did (and she did so much) but the social and political background surrounding her, Britain as well as the wider world at the time.
The most important part, for me, it's written non-judgmentally. Facts are simply stated.

spoiler alert, This remarkable woman transformed nursing and turned it into a proper profession laying the foundation for modern nursing.

"As a retired nurse, who trained at a London hospital in the early 1970’s I found the book to be an excellent read and would recommend it to anyone interested in the achievements of this notable and great lady."

As a nurse myself, it was interesting to see how far we have actually come, in a fairly short space of time. It horrifies me that anyone could call themselves a nurse, back in the day, despite not having had any training or really having much of a clue generally. That it took such a long time to get registration for nurses in place, is really astonishing. If not for determined women like Ethel Fenwick, this probably would not have happened at all. It is apt, that she was the very first registered nurse :)

I enjoyed reading this book and the little stories of what was going on in history at that point in time were very useful as well.

I have been a nurse for a long time and loved learning more about Ethel Gordon Fenwick. This book is packed full of information and reads better than a textbook. I love how the chapters are divided by time periods to capture such a packed time frame. There were so many things to cover that would have impacted her career and her lifetime. I never felt overwhelmed or confused and thought things were explained very well. I really liked the coverage of contemporary events during her lifetime as it brought tremendous perspective to many events. I never considered her a contemporary to Nightingale and loved how they viewed the registry so differently, yet both had a heart and a passion to advance the profession of nursing. A truly enlightening book for all lovers of nursing history.


Jenny Main has written a book that perfectly combines the career of an intrepid worker on behalf of nurses, and in many ways the medical profession, and an impressive social history of the period. I enjoyed the combination, making this a book that I shall enthusiastically read again.