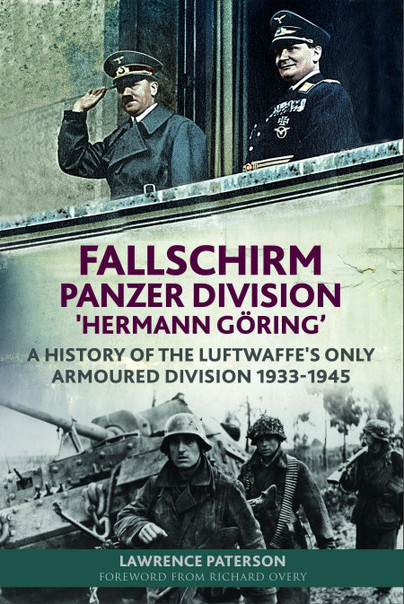 Add to Basket
Add to Wishlist
You'll be £25.00 closer to your next £10.00 credit when you purchase Fallschirm-Panzer-Division 'Hermann Göring’. What's this?
+£4.50 UK Delivery or free UK delivery if order is over £40
(click here for international delivery rates)

This unit fought throughout the Second World War, meeting Anglo-American forces in vicious battles across the European theatres of Tunisia, Sicily and Italy before finally being defeated by the Red Army on the Eastern Front. The Hermann Göring Panzer Division incorporates technical details of these battles with the turbulent politics and Machiavellian manoeuvring of Hitler’s inner circle, giving military-history enthusiasts fresh insights into the development and role of this unusual division through the war.

"...includes a considerable number of first-person accounts from soldiers of the division as well as Allied opponents..."

Highlight: '...an important contribution to an otherwise little-known but fascinating unit.'

I even enjoyed the notes at the back which also comes with a list of Knights Cross recipients and finally, I really liked the picture on the back of the book.

Excellent book. I would recommend it to anyone who likes world war 2 history, I liked the attention to detail of the wars engaged in by the German tank, panzer division. They were a formidable force to be reckoned with during world war 2.

Overall, I am confident that this book will become the standard reference book in the English language on the HG Division’s history. The standard of the author’s work is exceptionally high and this new release honours the brave men of this Division – so many of which paid the ultimate price.

This is an interesting book and for anybody with an interest in particular of the war in Italy and Sicily, I would recommend this book as another view of the campaign.

A great look at one of the German panzer groups in WW2. The author does an outstanding job of covering the unit from its creation to the end of the war. The story is well told and full of first hand accounts to keep you in the story. A great read for the war history fans.

This history of the Herman Goring Division and its predecessor units is packed with detail concerning operational structures and personnel but if that sounds dull do not be put off. It is very much part of a comprehensive and well delivered history that makes for fascinating reading. For anybody interested in the role of this elite unit, it is a ‘must read’ and as part of an understanding of the campaigns it fought, it offers a wider perspective of its interaction with adjoining units. My one gripe is the lack of sketch maps to illustrate the history, but there is always google! Also, it is not often that a serious and well-presented work of history is dedicated to Eddie van Halen. I’m sure Eddie would have approved.