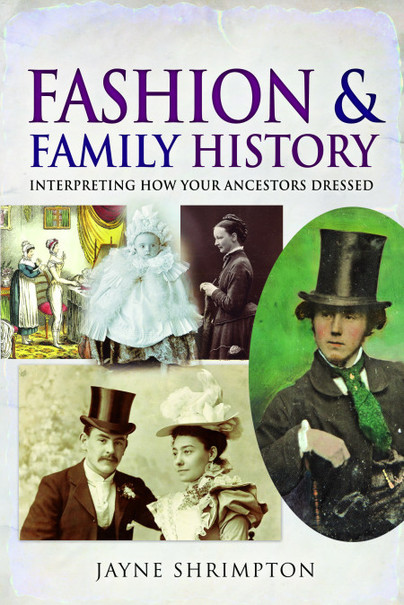 Interpreting How Your Ancestors Dressed

Preorder
You'll be £11.99 closer to your next £10.00 credit when you purchase Fashion and Family History. What's this?
+£4.50 UK Delivery or free UK delivery if order is over £35
(click here for international delivery rates)

Studying dress history teaches us much about the past. In this skilfully-illustrated, accessible and authoritative book, Jayne Shrimpton demonstrates how fashion and clothes represent the everyday experiences of earlier generations, illuminating the world in which they lived.

As Britain evolved during the 1800s from a slow-paced agrarian society into an urban-industrial nation, dress was transformed. Traditional rural styles declined and modern city modes, new workwear and holiday gear developed. Women sewed at home, while shopping advanced, novel textiles and mass-produced goods bringing affordable fashion to ordinary people. Many of our predecessors worked as professional garment-makers, laundresses or in other related trades: close to fashion production, as consumers they looked after their clothes.

Jayne Shrimpton is a professional fashion historian and internationally-known ‘photo detective’ with a MA degree from the Courtauld Institute of Art, University of London. A former Curator at the Heinz Archive and Library, National Portrait Gallery, London, she is an independent image consultant, speaker, author and magazine columnist, working primarily in the family history arena. She dates photographs at public events and advises on celebrity photographs, also appearing on-screen for BBC TV programme Who Do You Think You Are? Her books include Family Photographs and How to Date Them, British Working Dress, Victorian Fashion and Tracing Your Ancestors through Family Photographs.