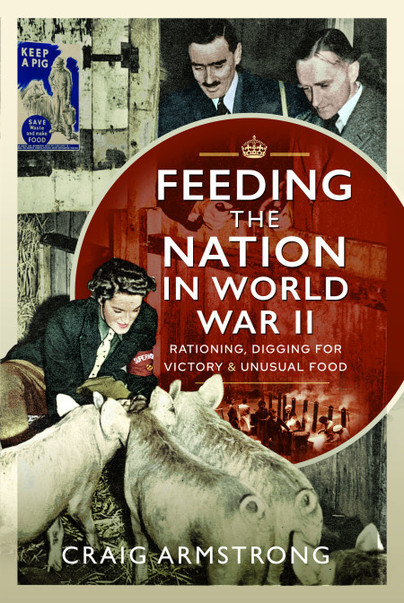 Preorder
Add to Wishlist
You'll be £15.99 closer to your next £10.00 credit when you purchase Feeding the Nation in World War II. What's this?
+£4.50 UK Delivery or free UK delivery if order is over £35
(click here for international delivery rates)

One of the main dangers to Britain during the Second World War was the possibility of the country being starved out of the war. Indeed, it was what Churchill feared the most. Before the war, Britain was hugely dependent upon foreign imports of food and supplies, but with unrestricted submarine warfare these lifelines were in danger of being cut and the amount of imports hugely reduced.

Britain was not unprepared. Lessons had been learned during the First World War, when people had been encouraged to grow more of their own food. The Ministry of Food, in particular, had detailed plans in the event of a future war and the ‘Dig for Victory’ campaign rightly went down in history as one of the great successes of the British Home Front.

For the farmers of Britain the war meant a massive upheaval, as the government ordered them to plough up millions of acres of land to grow valuable arable crops. Meanwhile, with rationing a daily and inescapable part of life, the people of Britain had to get used to different foodstuffs, including powdered egg, Spam and even whale meat.

Incredibly, the diets of many British people actually improved during the war and the fact that the country avoided starvation demonstrated not only the success of government planning, but also the determination and ingenuity of the wartime generation.