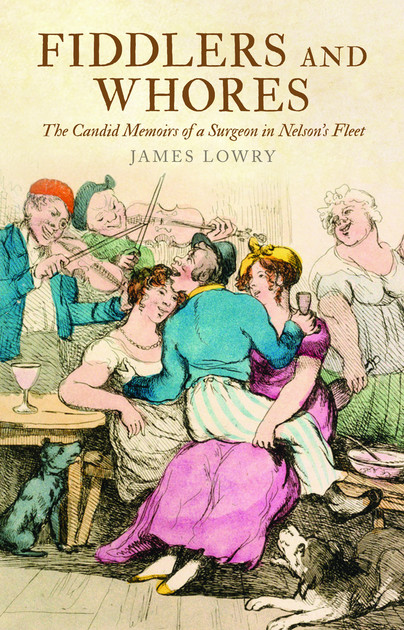 The Candid Memoirs of a Surgeon in Nelson's Fleet

Add to Basket
Add to Wishlist
You'll be £5.00 closer to your next £10.00 credit when you purchase Fiddlers and Whores. What's this?
+£4.50 UK Delivery or free UK delivery if order is over £35
(click here for international delivery rates)

'A country of fiddlers and poets, whores and scoundrels', Nelson's famous description of Naples, was a world eagerly embraced by a young Irish doctor called James Lowry who went to sea, apparently, for the sheer sense of adventure and a desire for exotic travel. Sent out to join Nelson's victorious fleet after the battle of the Nile, he was to experience plenty of naval action, and to see more foreign climes than perhaps he had anticipated. Taking part in the successful British campaign against the remnant of Napoleon's army in Egypt brought him into contact with an entirely different culture, but perhaps not as strange as the wooden world of the Navy, which he chronicles with the detached and slightly bemused eye of an outsider.

While he found the Navy odd and intriguing, what really engaged his interest (and enthusiasm) was the relaxed sexual mores of Italian society. His memoirs were written at the request of his younger stay-at-home brother, so, untrammelled by any thought of publication, he recounted his adventures with relish and in rather more detail than might be thought proper. While there may be an element of boasting, much of what he describes of naval life in the Mediterranean of Nelson's day rings true, and many unlikely events can be confirmed from other sources.

This fascinating memoir lay lay hidden in the hands of Lowry's family for 200 years before its first publication in 2006.

Readers in search of a first-person, contemporary travelogue of the Mediterranean will be overjoyed to read Lowry’s memoirs of his adventures to these exotic places.

The original manuscript has been in the hands of Lowry's descendants for two centuries, but this entertaining and enlightening account is here published for the first time.

Quite what John Lowry, a Presbyterian minister, made of his brother’s stories is unknown, but the notebook containing the memoir must have been treasured as it went with his family to America. That it has survived at all is something of a wonder, and James Lowry’s story is well worth reading, if not as a piece of history, then certainly as the tale of a young man growing into maturity.

An engaging and entertaining personal experience of a surgeon in Nelson’s Fleet. – Originally published by Chatham in 2006 and reprinted by the current owners of Chatham Publishing under the Seaforth imprint. A vivid picture painted with humour by one who was there – Most Highly Recommended.

James Lowry wrote the memoir at the behest of his brother, John, in 1807, a couple of years after he had left the navy. As he had lost his possessions in a shipwreck during the voyage from Gibraltar to England, Lowry wrote the memoir entirely from memory and so some parts of the story are recounted in much detail, but others are sketched in outline or simply passed over. Any frustration that this may cause, however, quickly disperses with Lowry’s easy to read style of writing and the humanity which shows through it.