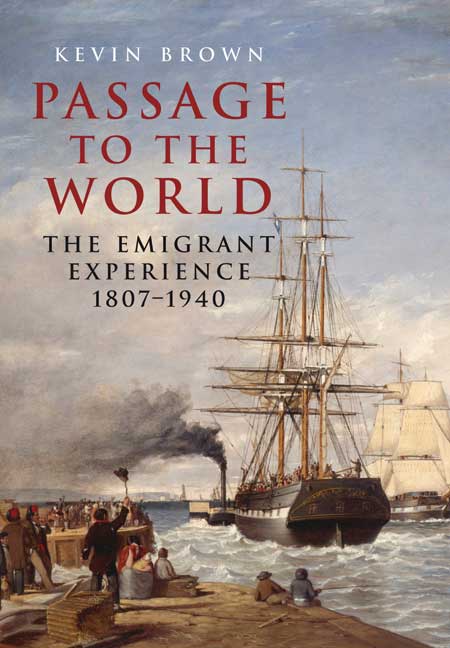 Passage to the World (ePub)

Click here for help on how to download our eBooks
Add to Basket
Add to Wishlist
You'll be £10.00 closer to your next £10.00 credit when you purchase Passage to the World. What's this?
Need a currency converter? Check XE.com for live rates

From the early nineteenth century onwards, literally millions of people left their homes to cross the seas. Some, like the convicts transported to Australia, had no choice; others like the indentured Indian and Chinese labourers had almost no alternative; but the vast majority were driven to escape war, famine or grinding poverty in Europe by seeking a new life abroad. Whatever their circumstances and wherever their destination, the one experience they all shared in common was the sea voyage.

This book is centred on the rite of passage that marked the transition from one life to the other, tracing the story of the emigrant, through a fresh look at original sources and first-hand accounts, from the decision to emigrate, the journey to the port and the voyage itself, to arrival in the new world. It describes the emigrant trade, the differing conditions on board sailing ships and steamers, convict and coolie ships, and the perils of overcrowding, epidemics, fire, shipwreck and even cannibalism. It also investigates the varied receptions emigrants were likely to face – not necessarily the welcome promised the 'homeless, tempest-tost' by the Statue of Liberty.

This unprecedented population shift left few European families untouched by emigration, while the present-day populations of the Americas and Australasia are dominated by the descendants of those who made the journey. This gives the emigrants' story a universal interest.

This history successfully moulds the conglomeration of emigrant histories into a streamlined explanation that highlights the perils and livelihoods of steerage to first-class cabin passengers on ocean liners. 'Passage to the World' cleverly shines as a welcomed addition to the general public for the collective experiences and trials faced on ocean liners. Brown's interpretation represents the current stance on emigration; it offers a well-researched look into the risks at sea while offering a comprehensive biography for those looking to delve deeper in the studies of ocean travel.

Brown makes a great, unprecedented, effort to bring together the various emigrant experiences at sea, differentiating on class (cabin versus steerage), types of migrants transported (convicts, coolies, settlers and labour migrants) and oceans travelled (Pacific, Atlantic and Indian Ocean). The book, spiced with literary descriptions of Charles Dickens, is an enjoyable read for the broader public and academics, who will find the primary source material offered useful and informative.

There can't be many European families without members who upped sticks for new lives overseas, leaving behind relatives, friends and possessions, in fact, all they knew. Millions emigrated to the New World in the 19th and and early 20th-centuries, many fleeing poverty, famine, persecution and war, others as convicts or pioneers. Whatever their circumstances and wherever they were headed, this fascinating new book focuses on their shared experience – the sea voyage to their adopted homeland at a time when such journeys were perilous and long. All these colourful stories from the archives give a rich insight into the emigrant experience, revealing, in the end, what a courageous, adventurous bunch of ancestors we had. Passage to the World is eye-opening and even inspiring. We could all learn a little something from this history of our emigrating ancestors. Our top choice!