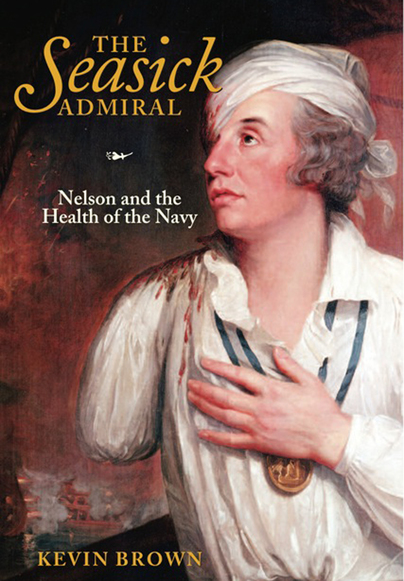 Nelson and the Health of the Navy

Add to Basket
Add to Wishlist
You'll be £25.00 closer to your next £10.00 credit when you purchase The Seasick Admiral. What's this?
+£4.50 UK Delivery or free UK delivery if order is over £35
(click here for international delivery rates)

Horatio Nelson did not enjoy robust good health. From his childhood he was prone to many of the ailments so common in the eighteenth century, and after he joined the Navy he contracted fevers that further undermined his strength: he was even seasick whenever he first put to sea. Nevertheless, he saw more action than most officers, and was often wounded – the loss of the sight in one eye and a shattered arm were the most public, but by no means his only injuries. This personal experience of sickness made him uniquely aware of the importance of health and fitness to the efficient running of a fleet, and this new book investigates Nelson's personal contribution to improving the welfare of the men he commanded.

It ranges from issues of diet, through hygiene to improved medical practices. Believing prevention was better than cure, Nelson went to great lengths to obtain fresh provisions, insisted on cleanliness in his ships, and even understood the relationship between mental and physical health, working tirelessly to keep up the morale of his men. Many other people contributed to what became a revolution in naval health but because of his heroic status Nelson's influence was hugely significant, a role which this book reveals in detail for the first time.

This book is a considerable work of scholarship with 19 pages of detailed notes and a 13-page bibliography. Thus it is not only a good read but a significant reference book. I recommend it to you.

Horatio Nelson did not possess particularly good health. During the entire time he was growing up he suffered from many of the ailments common in the eighteenth century. After he joined the Navy he went down with fevers that further undermined his strength: he was always seasick outward bound when the ship first put to sea. The Fighting Admiral saw more action than most officers, and often took injuries – the loss of the sight in one eye and an amputated arm were the most public, but by no means his only wounds.

This personal experience of illness made him uniquely aware of the importance of health and fitness to the efficient running of a fleet, and this new book investigates Nelson’s personal contribution to improving the welfare of the men he commanded, the deeply humanitarian side of a great warrior.

There is all of 16 pages of photographs and illustrations to complement the text.