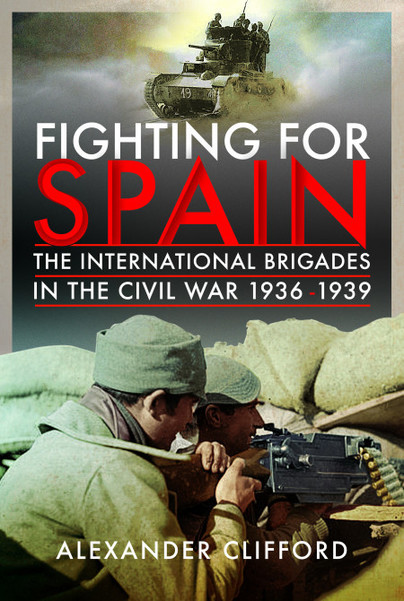 Add to Basket
Add to Wishlist
You'll be £17.50 closer to your next £10.00 credit when you purchase Fighting for Spain. What's this?
+£4.50 UK Delivery or free UK delivery if order is over £35
(click here for international delivery rates)

In the English-speaking world, the Spanish Civil War is perhaps best remembered through the exploits of thousands of foreign volunteers from across the globe who joined the International Brigades – a force of communists, socialists and others who took their opposition to fascism to extraordinary lengths. Their passionate political commitment to Spain’s cause and determination in battle placed them among the crack troops of the Republic’s People’s Army.

Yet while much has been written about the political, social and cultural significance of the brigades and their experience in Spain, less has been said about their performance as front-line troops. It is this military history that Alexander Clifford focuses on in vivid detail in this highly illustrated new study.

His account tells the story of the brigades as combat units, tracing the course of each major battle in which they fought and showing the drastic changes they underwent as the war progressed – from an untrained militia in 1936, to the tried and tested shock troops of 1937, to a shadow of their former selves by 1938 after repeated maulings and the introduction of Spanish conscripts to fill their ranks.

"...a well-documented and attractively illustrated history of volunteers who sided with the government."

The International Brigades were mythologized in one sense, that is, as invincible bulwarks of the defense of the Republic, or in another, as equipped with automatons voted only to the final victory of Communism. Reality is well analyzed by Clifford in his book, discarding many of these interpretations. His book, which tells of a conflict whose survivors have now almost disappeared, is a new look at a subject that has seen so many mystifications. Clifford faces it as a serious historian and with the contribution of sources and data produces an excellent book.

This was a highly fascinating and enjoyable read, it was a conflict that I didn’t really have much interest in prior to this book. I was aware of it, but it didn’t pull at my interest, since finishing this book I want to find out more. As a wargamer, this could be an interesting conflict to plan and game in, similar to the early Japanese/Chinese conflict in the East. The Spanish Civil War was a fore runner to the Second World War.

If you’ve not read anything about this conflict, then I’d highly recommend grabbing a copy of this book, you won’t be disappointed. If you’re a wargamer and looking for an early 20th Century conflict to delve into, then this could be ideal for you.

Clifford addresses the communist bias in the selection of officers, which often led to serious casualties due to inept but politically connected commanders, and the suppression of political dissenters, both matters usually ignored in books on the brigades. He also handles the larger war rather well, noting that atrocities were perpetrated by both sides. A good book on a contentious subject.

It covers everything from recruitment and training to the initial fighting and the Brigades use as shock troops, despite having poor equipment. There are photos throughout, maps and features on prominent leaders, cumulating with the final battles, retreats and demobilisation of the volunteers. It's the full story of those who believed in a cause in foreign land strongly enough to put their lives on the line for it.

It is indeed pleasing to see Pen & Sword making the commitment to publishing two similar, yet very different and mutually supportive books on the Spanish Civil War (The People's Army in the Spanish Civil War). They are sure to be welcome additions to novice or experienced reader to enable deeper study and greater understanding of both the International Brigades and the Spanish Civil War. I can be sure that by reading one will encourage many readers to purchase the other! An enjoyable read. Detailed and concise. A worthy book for both novice and grognard.

Alex Clifford also offers a detailed account of the war, through the lens of a military historian, in his richly illustrated book Fighting for Spain: The International Brigades in the Civil War 1936- 39.

Featured in the ASLEF journal.

Dr David Mathieson is an author, historian and historical guide

Author Alexander Clifford already has a number of books on the Spanish Civil War under his belt and it's clearly a subject that grips him. His latest book on the subject is no less gripping and is compelling and well illustrated with photos - at least one of these gruesome - and maps.

I knew very little about the International Brigades (in fact I thought it was International Brigade, singular) before reading this book. George Orwell served, I suspect most people know that, but so too did many other ordinary people from many countries, the majority returning to their homelands and to anonymity after the conflict had ended.

The book's format is agreeable: a central narrative and potted biographies of some of the participants scattered throughout the 235 pgaes. There is an index, a bibliography and a useful appendix listing the IB units; recommended.

Fighting for Spain should be read by those wanting a balanced picture of the International Brigades. Alexander Clifford doesn’t attempt to make heroes out of people who were imperfect in many ways and yet often behaved heroically. He paints them as ordinary men who rose above the ordinary by participating in a war they could easily have ignored but chose not to. His book is a fitting tribute to their courage. It is well-illustrated with maps and photographs, and has a useful bibliography.

The book has lots and lots of pictures, quotes from primary sources, and biographical details on different prominent fighters, making the book very interesting. I enjoyed a lot reading it and I’m very glad that I was able to attend the virtual launch too. The book deals with the major battles of the war, talks about training, and so forth. 5/5 stars!

Fighting for Spain is an excellent addition to the literature on the International Brigades in the Spanish Civil War.

Accessible and well written, backed up with useful maps and images, it includes a wealth of information on the formation and composition of the Brigades and their role during the war.

This a well-presented narrative history that does not allow the International Brigades to automatically become heroes. It is a balanced view and makes good use of images and maps in providing a very readable account of this aspect of the Spanish Civil War.